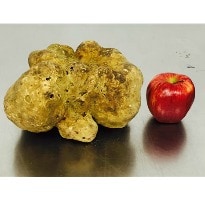 A record-setting 4.16-pound (1.89-kilogram) white truffle has sold for $61,250 at a New York City auction. Sotheby's says the fungus was sold to a food and wine lover from Taiwan bidding by phone.

The truffle was found last week in Umbria, Italy, by Sabatino Truffles. The firm had said it turned down million-dollar offers from buyers in China. Instead, it chose to auction the truffle in New York to benefit Citymeals-on-Wheels and the Children's Glaucoma Foundation.

Promoted
Listen to the latest songs, only on JioSaavn.com
Sabatino Truffles spokeswoman Jane Walsh had said the truffle was slightly smaller than an American football. She says the average white truffle that's unearthed is about the size of a walnut.