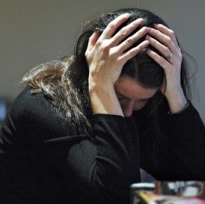 Depression and anxiety are affecting more young people than ever before. According to a study published today by the Office for National Statistics, one in five 16- to 24-year-olds are suffering psychological problems, which is almost the rate at which these are seen in early middle age, the life-stage usually most associated with mental health issues.

Areas of concern for young people stretch from relationships with parents, friends, colleagues or fellow students, to worries about appearance and fitting in. Young women were more likely than young men to be showing signs of distress, with a report earlier this week claiming that one in five teenage girls are opting out of classroom discussions and even playing truant because they hate the way they look.

How to deal with this rise in anxiety and depression among a group that some perceive as carefree? Society's role can be debated elsewhere, but for these "emerging adults" and anyone associated with them, here are some good starting points for action.

1) Ease off on social media

Great as it is to use Facebook, Instagram, Snapchat and Twitter to stay in touch with friends, it can easily lead to a major dose of envy, paranoia and low self-esteem. A study of 960 college students published in the International Journal of Eating Disorders has shown how Facebook can affect women's body image. "In examining the immediate consequences of Facebook use, we found that 20 minutes contributed to higher weight and shape concerns and anxiety compared to a control internet condition," said Pamela Keel, who oversaw the study.

The author of Rewired, Professor Larry Rosen, has - unsurprisingly - found that young people in this age group use social media the most (at least once an hour, over many platforms). While people clearly use social media for gaining pleasure and avoiding anxiety (or fear of missing out), Rosen assesses that balance at a worrying three-to-one of anxiety to pleasure.

• Limit your social media use to certain times of day; don't go to bed with your phone.

The older we are, the less sleep we need. Teenagers and young adults need around nine hours and neuroscientists say that teens run on a different circadian rhythm to older people, getting tired later but not being ready to wake up until later too. Depression can cause insomnia - but not getting enough sleep can also exacerbate low moods. Sleep is when you process emotions and memories.

• Don't get into the habit of going to bed late every night; you'll find it hard to break.

Getting some exercise isn't just a good idea for your physical health. Being young and depressed can leave you not wanting to get out of bed in the morning, which further exacerbates depression and vice versa. As one study recently pointed out, increasing your exercise levels from nothing to at least three times a week can decrease the likelihood of becoming depressed by almost 20%.

• You don't have to run a marathon. Take a walk, use the stairs, get on your bike.

4) See friends in the flesh

A young person will be more true to themselves in real-time and real life. Carl Pickhardt, a psychologist, says: "An adolescent's internet identity is carefully crafted ... to define self, publicise personal image, enhance social standing and attract attention, particularly of peers."

But when we can't plan, we are spontaneous. Also, in meeting, we often touch - a hug, a slap on the back, a touch of the hand. These are all markers of closeness and help to build a bond. "When you stimulate the pressure receptors in the skin, you lower stress hormones," according to the Touch Research Institute.

• Arrange meet-ups but try not to always make them in bars or clubs; alcohol can be a depressant and sometimes you need a quiet place to have a good talk to someone.

A conversation with your GP is a good start; the Improving Access to Psychological Therapies (IAPT) programme is designed to provide talking therapy for those in need. However, many people find that the wait is long and the choice (largely cognitive behavioural therapy) is limited. Therapists and counsellors are increasingly seeing younger people and some offer concessions based on lower incomes and circumstances.

• Talking to a trained mental health professional on a weekly basis, even for a short period, can help you see your situation from a different perspective and give you valuable tools to help avoid it getting worse.

'A report from the Government Equalities Office claimed that one in five teenage girls are opting out of classroom discussions and playing truant because they hate the way they look.' Photograph: David Cheskin/PA