Breakfast That Can Help You Lose Weight 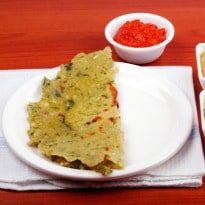 Eating a protein-filled breakfast is the answer for those who want to lose weight instantly, according to a new research.

A new study reveals that a meal high in protein instead of carbohydrates or fibre for breakfast could help stave off hunger pangs later in the day.

Eating eggs, sausages or bacon for breakfast could therefore help in eating less during the day, reports femalefirst.co.uk.

The experiment, conducted at the University of Missouri on a group of 18-55 year-old women, showed that a high-protein breakfast keeps them full than a meal with less protein but the same amount of fat and fibre.

The team, led by research scientist Kevin Maki, found that eating around 35 grams of protein for breakfast - the equivalent to a four-egg omelette or two sausages and a rasher of bacon - helped regulate appetite.

"Eating a breakfast rich in protein significantly improves appetite control and may help women to avoid overeating later in the day," he said.

Promoted
Listen to the latest songs, only on JioSaavn.com
Egg Chaat