Chemicals in Bottles, Cans Can be Life Threatening 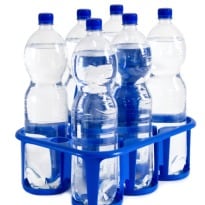 Forget about the quality of water. A mere contact with the water bottle can be life-threatening.

A commonly used plasticiser found in products such as water bottles, soup can liners and paper receipts, can increase the risk for prostate cancer later in life, said a study.

"Bisphenol A, or BPA, is widely used to soften plastics. Steering clear of the chemical is nearly impossible," said Gail Prins, professor of physiology at University of Illinois at Chicago.

What left the researchers more worried is exposure of the foetus to BPA in the uterus.

The chemical, which mimics the hormone estrogen, has been linked to several kinds of cancer, including prostate cancer, in rodent models. And humans are not safe either, warned the study published in the journal Endocrinology.

Previous studies have shown that people who avoided all contact with plastics or other BPA-containing objects for up to a month or more still had BPA in their urine.

"It means they must have come into contact with BPA in the last 24 to 48 hours, since it clears the body rather quickly. It's very hard to avoid," added Prins.

"The amount of BPA we fed the mice was equivalent to levels ingested by the average person," said the researchers.

They found a third of tissue samples taken from mice fed BPA had either pre-cancerous lesions or prostate cancer.

"We believe that BPA actually reprogrammes stem cells to be more sensitive to estrogen throughout life, leading to a life-long increased susceptibility to diseases including cancer," Prins added.

Promoted
Listen to the latest songs, only on JioSaavn.com
The findings of adverse effects of BPA in human tissue are highly relevant and should encourage agencies concerned to re-evaluate their policies in the near future, said the study.