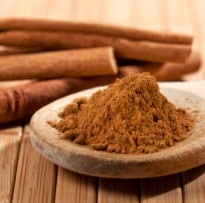 Cinnamon is a common kitchen spice obtained from the inner bark of trees. With a captivating aroma, it is often added to desserts and curries to enhance the flavours. It is not just a versatile cooking ingredient but also popular for its numerous health benefits. Previous research has shown how cinnamon helps with digestion, lowers blood sugar and reduces bad cholesterol. (More: Cinnamon may help diabetics)

A new study that appeared in the journal Food Control, has discovered that cinnamon also works as an anti-bacterial agent. It can prevent some serious food-borne illnesses that are usually caused by pathogenic bacteria. The findings also showed that the food industry can effectively employ cinnamomum cassia oil as a natural anti-bacterial agent.

Lina Sheng from the Washington State University said "The oil can be incorporated into films and coatings used for packing both meat and fresh produce. It can also be used while washing meat, fruits or vegetables to eliminate micro-organisms."

During the study, researchers found that this essential oil killed several strains of toxin producing E coli (Escherichia coli) known to the US Centers for Disease Control and Prevention as 'non-O157 STEC'. The study looked at the top six strains of non-O157 STEC.

Sheng said that "Cinnamon cassia oil is effective in low concentrations. About 10 drops of the oil diluted in a litre of water killed the bacteria within 24 hours."Meijun Zhu, an assistant professor at the Washington State University pointed out that the rising
health concerns about chemical additives have strengthened the demand for natural food additives. "Our focus is on exploring plant-derived natural food bioactive compounds that act as anti-microbials to control food-borne pathogens, in order to ensure safety of fresh produce."