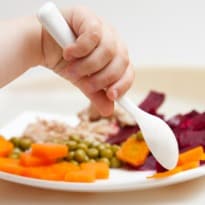 Researchers in Canada have observed that a child's diet at the age of three could determine its risk of heart disease as an adult.

In a study, the researchers found that the effects of unhealthy eating commence at an early age, with the tell-tale signs of cholesterol noticeable in children aged between three and five, Daily Mail reported.

According to the researchers, from St Michael's Hospital in Toronto, this suggests interventions to protect health could start much earlier,

The researchers looked at 1,076 pre-school children and studied the link between eating habits and serum levels of non-high-density lipoprotein (HDL) cholesterol -- a marker of later cardiovascular risk.

"Our results show that associations between eating behaviours and cardiovascular risk appear early in life and may be a potential target for early intervention," said Dr. Navindra Persaud.

"Eating behaviours as reported by parents were positively associated with serum non-HDL cholesterol levels in children aged three to five.

Listen to the latest songs, only on JioSaavn.com
"To do so, evidence suggests promoting responsive feeding, where adults provide appropriate access to healthy foods and children use internal cues (not parent-directed cues or cues from the television) to determine the timing, pace and amount they consume." Simply put, the association between eating behaviour and cardiovascular risk prove that starting healthy eating habits early could cut the risk of heart disease later in life.

Comments The findings were published in the Canadian Medical Association Journal.