FDA Moves to Ban Sales of e-Cigarettes to Minors 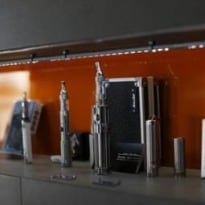 The U.S. Food and Drug Administration proposed rules on Thursday that would ban the sale of e-cigarettes to anyone under 18, but would not restrict flavored products, online sales or advertising, which public health advocates say attract children.

The long-awaited proposal would subject the $2 billion e-cigarette industry to federal regulation for the first time.

FDA Commissioner Margaret Hamburg said at a briefing that the proposal represented the first "foundational" step towards broader restrictions if scientific evidence shows they are needed to protect public health.

Critics of e-cigarette advertising say it risks introducing a new generation of young people to conventional cigarettes when little is known about the long-term health impact of the products. And they lamented the fact that limits were not included in the proposed rule.

"It's very disappointing because they don't do anything to rein in the wild-west marketing that is targeting kids," said Stanton Glantz, a professor at the Center of Tobacco Control Research and Education at the University of California San Francisco. "They should not have been so timid."

Hamburg said the current proposal "lays the foundation for many more actions and activities."

Vince Willmore, a spokesman for the Campaign for Tobacco Free Kids, said the proposal "by no means does everything we think needs to be done, but it starts the process. What is critical now is that they finalize this rule and then move quickly to fill the gaps."

A law passed in 2009 gave the FDA authority to regulate cigarettes, smokeless tobacco and roll-your-own tobacco and stipulated the agency could extend its jurisdiction to other nicotine products after issuing a rule to that effect. E-cigarettes use battery-powered cartridges to produce a nicotine-laced inhalable vapor.

In the short term, the rule would prohibit companies from distributing free e-cigarette samples, forbid vending machine sales except in adult-only venues and prohibit sales to minors. Companies would be required to warn that nicotine is addictive, but no other health warnings would be required. The addiction warning would have to be added no later than two years after the rule is set. The companies would not be allowed to make health claims in any advertising.

The proposal is subject to a public-comment period of 75 days. Willmore said the FDA should aim to establish the rule within a year.

Some are skeptical that restrictions on marketing or flavors will come any time soon.

"The reality of these things is that every step takes years," said Glantz. "By not addressing the youth-directed marketing it means it won't be addressed for a very long time."

Some e-cigarette companies that sell primarily through convenience stores were surprised at the lack of restrictions on online sales, since it can be difficult to verify a customer's age over the internet.

"The internet thing is very surprising to me," said Miguel Martin, president of Logic Technology, one of the biggest e-cigarette manufacturers. "It reduces the visibility of the sales of the products and the type of products that the government has awareness of."

The rules would require companies to submit new and existing products to the FDA for approval. They would have two years to submit applications from the time the rule goes into effect. Companies may continue selling their products and introducing new products pending the FDA's review.

In the meantime, they would be required to register with the FDA and list the ingredients in their products. They would not be required to adhere immediately to specific product or quality control standards. That could come later, Hamburg said.

E-cigarettes and other "vaping" devices generate roughly $2 billion a year in the United States, and some industry analysts expect their sales to outpace the $85 billion conventional-cigarette industry within a decade.

Advocates of e-cigarettes claim they are a safer alternative to conventional cigarettes, since they do not produce lung-destroying tar. But there is little data about their long-term safety.

The FDA's proposal leaves many questions unanswered about how new products would be regulated over the long run. One key question relates to how products are approved.

Under current law, new tobacco products can be approved if they are "substantially equivalent" to a product that was on the market before February 15, 2007. It is unclear whether any e-cigarettes were on sale before then, to be used as a benchmark.

Mitch Zeller, head of the FDA's tobacco division, said at a briefing that the agency would be seeking more information during the public-comment period on whether the "substantial equivalence" pathway is even valid for e-cigarettes.

If it is not, e-cigarette companies would have to use a different process, which would require them to prove their products are appropriate for public health, a higher hurdle to clear.

Also unclear is the fate of some cigars. The current proposal would include e-vaping products and other tobacco products, but premium cigars may be excluded. The FDA said it would seek public comment on whether all cigars should be regulated equally. One option proposed by the agency is to regulate them all. The other is to define a category of premium cigars that would not be subject to the FDA's authority.

Under the proposed rule, premium cigars are considered those wrapped in whole tobacco leaf, made manually by combining the wrapper, filler and binder, have no characterizing flavor, have no filter, tip, or non-tobacco mouthpiece and are relatively expensive.

Listen to the latest songs, only on JioSaavn.com
Tobacco company Lorillard Inc, owner of the blu e-cigarette brand, is the dominant player in the field, followed by privately held NJOY and Logic. The three account for an estimated 80 percent of the market.