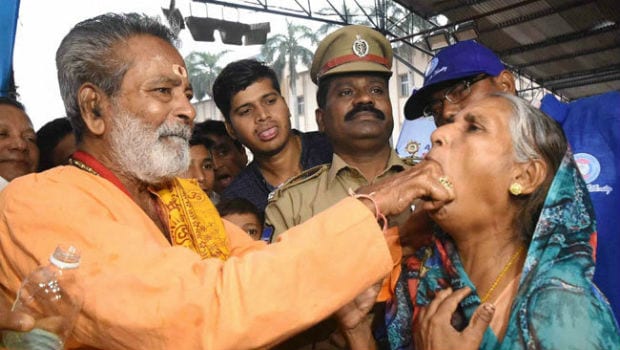 Highlights
Come monsoon, and this is the time when thousands and thousands of people head to Hyderabad to get a dose of a miracle medicine, touted to cure asthma. This medicine is peculiar because it is no pill or syrup, but a live fish that you are made to swallow down your throat. Commonly referred to as 'fish prasadam' by the locals, it is distributed by the Bathini Goud family in an annual event known as Mrigasira Karthi. Apparently, the family has been conducting this event for over a century now, with more and more believers joining in every year.

So what really is this alternative medicine to cure asthma? Well, it involves murrel fisherlings, which is also referred to as snakehead fish due to its close resemblance, and was declared as the state fish of Telangana in 2016. The fish breeds in freshwater bodies, and is commonly found in ponds, lakes and rivers. In many native cultures, it is considered to be a health benefiting fish.

The Bathini Goud family makes the 'fish prasadam' by stuffing the fish with a yellow herbal paste, the secret recipe of which was passed down the family through a Hindu saint. They claim that the fish carries the medicine and wiggles its way through the throat to clear mucous, making it easier to breathe. The patients are advised not to drink water until 30 minutes after the medicine is administered. They are also asked to follow a strict diet post the 'prasadam'.

According to the fisheries department, about 60,000 murrel fish were stocked for this event. Though there has been no evidence to indicate its clinical benefits, many people who have received the treatment claim that is has cured the illness for them. Medical experts, however, are not in support of the treatment, stating that it is more a psychological effect. Since the people believe in it so strongly that after they swallow the fish, their minds make it feel real. The high court too ruled that they cannot term it as 'medicine'.