Is Your Child Sitting Uncomfortably? Then We'll Begin 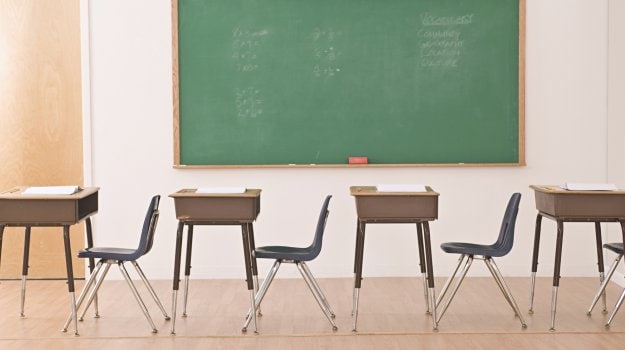 Those hard stacking chairs found in classrooms across the country may be giving schoolchildren bad backs. So one woman is campaigning to make lessons less painful.

It’s a childhood memory trigger up there with the smell of crayons and the sound of a Slinky travelling down the stairs. The feel of a school chair: bum-numbingly hard, built for stacking not sitting, mass-production not comfort, and bucket-shaped to a rigorous ergonomic standard that ensures it won’t fit a single child’s bottom in the land. Now one woman has decided to do for school chairs what Jamie Oliver did for school dinners. As in improve them, not start a boot camp in which designers are forced to stop manufacturing the Turkey Twizzlers of school furniture and make entertaining telly in the process.

Judith Kleinman, a professional double bass player and Alexander technique practitioner who teaches at the Junior Royal Academy of Music, tells me she started the Chairs for Children campaign after coming across an increasing number of children with back pain. “Some of my students find it very difficult to sit or stand for more than a few minutes,” she says. “They’re restless and exhausted. We’re really letting young people down by not recognising the long-term harm caused by a backward-sloping chair.”

It might seem a micro issue during an election campaign in which no one seems to be mentioning schools let alone how we furnish them, and it may not be glam enough to win Kleinman an audience with the future PM as Oliver did with Tony Blair in 2005. But the average child spends 15,000 hours sitting on chairs during their school life and when you factor in the slowed-down life of a child, in which double maths can feel as though it outlasts all five seasons of Game of Thrones, that’s a really, really long time.

So what exactly is the problem with your average school chair? The current European Standard, adopted by 33 countries, proposes that these chairs can slope backwards by five degrees. Kleinman’s Stat (Society of Teachers of the Alexander Technique) campaign says this backward sloping leads to hunching, slumping and poor posture, increasing the risk of back pain that can continue into adulthood. Stat is calling for sloping seats to be stacked away for good and replaced with flat or forward-sloping chairs that will encourage children, once and for all, to sit up straight.

Chairs seem as good a place as any to start. Around a fifth of children suffer back pain and three in every classroom will see a doctor before their 16th birthday complaining of the condition. It only gets worse with age; almost half the population will suffer from back and neck pain at some point in their life. “An employer would not be allowed to let an employee sit in chairs like this,” Kleinman says. “It’s ridiculous that children don’t have the same rights as adults.”