Just a Pinch of Salt Can Endanger Your Life 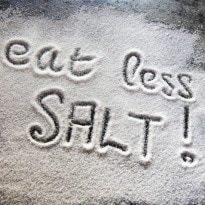 You may be adding just a pinch of salt to pep up your cooked food, but salty processed foods that you munch may just be inching you towards ill health and early death, British health experts warn.

If only shoppers checked everyday foods like bread and cereals for their ingredients, particularly salt, deaths caused by heart disease and strokes could dramatically fall, according to British health experts.

According to them, the high levels of salt-laden processed foods that we eat are responsible for pushing up blood pressure levels, and thus, raising the risk of heart disease, the Daily Express reported Tuesday.

They say most Britons have no idea how much salt they are consuming, or what the guideline amounts are. The recommended maximum daily intake is six grams. But British Heart Foundation statistics show, average current consumption is 9.7 gram a day for men and 7.7 gram for women.

In Britain, cutting average salt intake by just one gram could save 6,000 lives and 1.5 billion pounds (over $2.3 billion) a year. If the consumption fell by four grams, 25,000 lives a year could be saved, they say.

Following a study blaming salt in processed foods for America's out-of-control obesity crisis, the British health professionals decided to speak about the hidden dangers of salt.

"The same problems exist in the UK, with heart disease a well-recognised consequence of excessive salt. Greater awareness of the harm salt can do might help people choose to reduce their intake," said Ian Campbell, a British general practitioner.

"The average person has no idea of the quantities of salt in their diet" simply because they're not adding it, the manufacturers are.

Comments "People need to be aware the food we eat does affect our health directly. If you don't know what's in the food you are about to eat, ask."