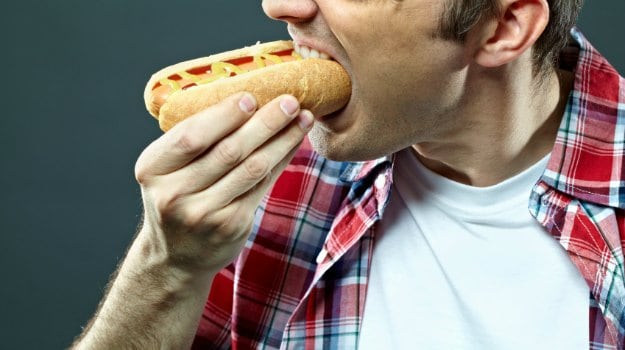 Maybe it's due to our evolution from the era of cavemen when the strongest and fastest hunters would have the biggest bounty to eat. Or maybe it's just another example of the male perception of what women like gone awry. Cornell University researchers have found that men tend to eat significantly more - nearly double - when in the presence of the fairer sex and that this excess may be "motivated by a hardwired male urge to demonstrate prowess." The study, published this month in the journal Evolutionary Psychological Science, involved observing diners at an all-you-can eat Italian buffet. Men who were dining with at least one woman consumed 93 percent more pizza (the equivalent of 1.44 more slices) and 86 percent more salad than those who were exclusively in the company of other men.

Listen to the latest songs, only on JioSaavn.com
"The findings suggest that men tend to overeat to show off," lead author Kevin Kniffin, a visiting assistant professor in applied economics and management, said. "Instead of a feat of strength, it's a feat of eating."  The authors theorized that the overconsumption may be an unconscious way to signal their biological fitness - something that might have made sense in the distant past but that doesn't make as much sense in a wealthy, modern day society obsessed with slim, fit bodies.

There's been a lot of previous work into the role of sexual selection in eating disorders like anorexia or bulimia among women which presumes males tend to select mates who are slim. But there's been significantly less on what's known as "disordered eating" - such as binge eating contests that reward people for eating as many hot dogs or steaks as possible - in men and what drives this. "Analogous to the view that women 'eat lightly' in order to respond to men's mating preferences, the intersexual or mate-choice hypothesis that we test presumes that men 'eat heavily' in response to women's mating preferences," the researchers wrote. They explained:

"Heroes who might have been warriors, princes, or knights in earlier tales are described today as CEOs, oil magnates, and corporate raiders. The common thread of these roles is that they each occupy a relatively high position in their respective social contexts. In our case, just as no one would expect an evolutionary basis per se for why women should prefer men who are adept at balancing a firm's quarterly earnings to exceed Wall Street expectations, the hypothesis that women will tend to prefer men who can eat conspicuously or competitively does not need a direct evolutionary basis beyond the fact that eating represents an avenue through which men can distinguish themselves as relatively superior."

But what do the women dining with these men think? The study found that women eating with men reported that they felt rushed during the meal and that they were the ones who ate too much - even though researchers found there was no evidence they overdid it.