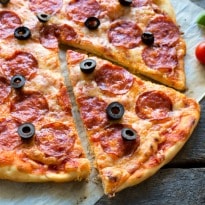 Study of 1,267 types of pizza finds that half contained more than 6g of salt, an adult's recommended daily allowance.

Some takeaway and prepared pizzas contain almost three times an adult's recommended daily intake of salt, the same as eating seven Big Mac burgers, a survey has revealed. In all, 586 (73%) of the 802 restaurant and takeaway pizzas analysed were found to have more than six grammes of salt, which is the maximum that government advisers say people should consume in a day.

A survey of 1,267 pizzas by Consensus Action on Salt and Health (Cash) found that overall, 612 (48%) had more than 6g of salt in them. Tesco's stuffed crust cheese feast takeaway pizza had the most salt of any supermarket-bought one, at 7.2g, while the Co-op's Loved By Us feta, olive and chargrilled vegetable pizza had the least, at just 2.4g.

Cash is concerned that some pizzas, such as Sainsbury's thin and crispy cheese and tomato pizza, contain even more salt than when they undertook a similar survey in 2012, despite the food industry being urged to reduce salt content.

"Most of us aren't aware of how much salt we actually eat on a daily basis, and thus the danger we are putting ourselves in," said Sonia Pombo, a Cash nutritionist. "With three-quarters of our salt intakes coming from processed foods such as pizza, how are any of us able to choose a healthier diet?"