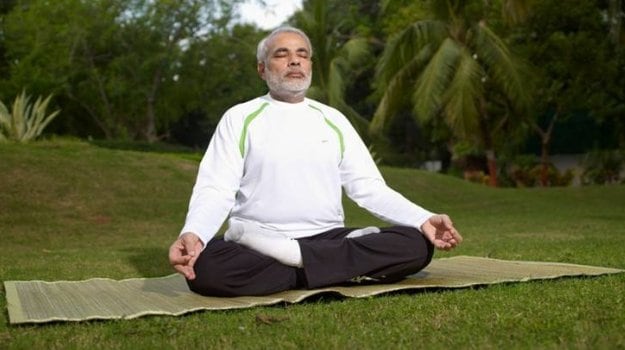 Prime Minister Narendra Modi will perform yoga at a public event next month, part of his international drive to increase participation in the ancient Indian discipline. Modi will practice physical poses and breathing control at the event on the country's main ceremonial avenue, in the capital New Delhi, on June 21, government and ruling party officials said.

The United Nations declared June 21 the first International Day of Yoga after adopting a measure proposed by the Modi government. Modi used his first speech at the U.N. General Assembly in September to call for such a day to be recognised.

Yoga lets people "discover the sense of oneness with yourself, the world and the nature", PM Modi said at the time. He is an enthusiastic practitioner of yoga. He says he performs Yoga exercises every day and credits them with giving him energy so he only needs a few hours sleep each night.

In November, Modi appointed India's first minister to promote yoga and traditional medicines as he embarked on a mission to increase awareness about home-grown health treatments. Modi also introduced a plan to allow government officials to practice yoga at work.

Promoted
Listen to the latest songs, only on JioSaavn.com
Police are drawing up security plans to manage the crowd at the event, which will take place on an avenue running between the presidential palace and India Gate, said an interior ministry official. Other senior politicians including Home Minister Rajnath Singh may join Modi in practicing yoga, an official with Modi's Bharatiya Janata Party said.

Yoga is one of India most successful cultural exports. About 20 million people are estimated to regularly perform the exercises in the United States and they spend an annual $10 billion on classes and related products, a 2012 study by yoga journal found.