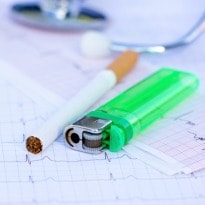 We know that smoking can lead to fatal health ailments but a new study establishes that it may even increase the risk of committing suicide. According to a latest study conducted by the Washington University School of Medicine in St Louis, nicotine in cigarettes may trigger psychiatric disorders and lead to suicidal tendencies.

The study was conducted by Richard A Grucza along with his team and was published in the journal Nicotine & Tobacco Research. It reports that suicide rates declined up to 15 per cent (relative to the national average) in the United States after implementing higher taxes on cigarettes and stricter policies to limit smoking in public places.

"Our analysis showed that each dollar increase in cigarette taxes was associated with a 10 per cent decrease in suicide risk," said Grucza, associate professor of psychiatry. "Indoor smoking bans also were associated with risk reductions," he said.

Grucza's team analysed data and monitored the trends as and when individual states took different approaches to taxing cigarettes and limiting their usage. It was found that from 1990 to 2004, states that adopted aggressive tobacco-control policies saw a decrease in suicide rates. The opposite was seen in states with lower cigarette taxes and more lax policies toward smoking in public. In such states, suicide rates increased up to 6 per cent, relative to the US national average.
.
From 1990 to 2004, the average annual suicide rate was about 14 deaths for every 100,000 people. The researchers used statistical methods to  compare the rate of suicide in different states. They also determined whether people who had committed suicide were likely to have an addiction for smoking. According to their findings, the risk of committing suicide was associated with the policies related to tobacco taxes and smoking restrictions.

Promoted
Listen to the latest songs, only on JioSaavn.com
Grucza suspects nicotine may be an important influence on suicide risk. "Nicotine is a plausible candidate for explaining the link between smoking and suicide risk," Grucza said. "Like any other addicting drug, people start using nicotine to feel good, but eventually they need it to feel normal. And as with other drugs, that chronic use can contribute to depression or anxiety, and that could help to explain the link to suicide," Grucza concluded.