The Easiest Way To a Healthy Heart 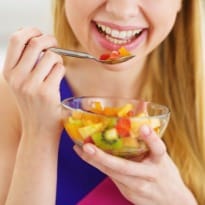 Researchers in the United States say their studies suggest that greater consumption of fruits and vegetables may reduce the risk of developing heart diseases in women. These women are less likely to have plaque build-up in their arteries 20 years later compared with those who consumed lower amounts of these foods in their adulthood, the study noted. Build-up of plaque can lead to heart disease, heart attack and stroke.

Surprisingly, the findings of the research showed that the same benefit did not hold true for men. "These findings confirm the concept that plaque development is a life-long process, and that process can be slowed down with a healthy diet at a young age," said Michael D. Miedema, a cardiologist at Minneapolis Heart Institute in the US.

For the study that included 2,508 participants, researchers evaluated the association between dietary intake of fruits and vegetables in young adults and the presence of coronary artery calcification (CAC) 20 years later.

The CAC scores, which were obtained using a CT scan, provided a direct estimate of the amount of plaque in the coronary arteries. Women who consumed eight to nine servings of fruits and vegetable a day for a 2,000-calorie diet in their 20s were 40 percent less likely to have calcified plaque in their arteries in their 40s, the study said.