To Lower Cholesterol, Try a Foray Into the Mediterranean 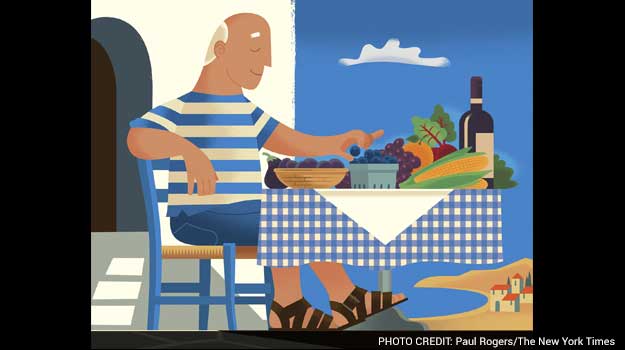 Many Americans, when faced with a serious health risk like high cholesterol, opt to take a pill rather than adopt healthier living habits. A middle-aged woman I know typifies this attitude. Thrilled with how well medication has controlled her rising cholesterol level, she continues to indulge in foods rich in cholesterol-raising saturated fats. She also carries around more body fat, especially risky abdominal fat, than is considered healthful.

Dr. Philip Greenland, a cardiologist and epidemiologist at Northwestern University Feinberg School of Medicine, said, “People should be following a heart-healthy diet, keeping their weight under control and exercising regularly. This would be a highly preferable approach. Unfortunately, it’s not the direction we’re going in.”

Yet experts like Greenland say that even when taking a statin or some other cholesterol-lowering drug, changes in diet and exercise habits are needed to maximize the drug’s benefits. He and others insist that drugs should be a last resort, after lifestyle changes fail to lower serum cholesterol adequately.

Although a heart-healthy diet cannot control a soaring cholesterol level in everyone (yours truly is an example), it may have benefits beyond protecting against heart attacks and strokes. According to Dr. Stephen L. Kopecky, a preventive cardiologist at the Mayo Clinic in Minnesota, one of two states in which heart disease is not the No. 1 killer (Colorado is the other), there is no better approach to healthful eating than the Mediterranean diet.

Noting that “every food a person might eat either fights or contributes to disease,” Kopecky said his clinic “tries to get everyone on a Mediterranean diet,” the traditional eating habits of people living in Greece and southern Italy. In addition to its heart benefits, studies suggest the Mediterranean diet may “reduce the risk of Alzheimer’s disease, cancer, Parkinson’s disease, diabetes, arthritis and the metabolic syndrome,” Kopecky said.

A patient education booklet prepared by the Mayo Clinic points out that “people in Greece eat an average of nine servings a day of antioxidant-rich fruits and vegetables,” and the booklet outlines a long list of potentially healthful foods. Some examples include prunes, blueberries, red grapes, oranges, strawberries, kale, spinach, brussels sprouts, broccoli, beets, red bell peppers, corn and eggplant.

People living near the Mediterranean eat lots of seafood, often daily, and the Mayo booklet recommends three or more servings a week of fish or shellfish. One or more servings should be a fatty fish rich in protective fish oils, like salmon, tuna, bluefish, sardines, mackerel and trout.

The white meat of chicken or turkey, without the skin, is the land animal protein of choice, the Mayo Clinic says, with a serving size limited to three ounces of cooked meat, about the size of a deck of cards.

Unlike many Americans, people living along the Mediterranean also consume lots of foods with vegetable protein: legumes like split peas, lentils and peanuts, and beans like lima, black, red, kidney and navy. However, in preparing these foods, it’s important to avoid using highly saturated pork fat. Also, don’t overdo peanuts, which are high in fat, albeit unsaturated fat, and pile on the calories.

A daily quarter-cup serving of tree nuts like walnuts, hazelnuts and almonds or seeds like sunflower and sesame seeds are good choices for snacks or crunchy enhancements in prepared dishes. Whole grain breads and cereals are part of the recommended diet, but note that a serving of bread is one slice. Breads should be eaten plain or dipped in olive oil, the Mayo booklet says.

Which brings us back to fats. Olive oil, especially extra-virgin and virgin, the least processed forms, or canola oil should be used in place of butter or margarine, both in cooking and at the table. Avoid all hydrogenated and partially hydrogenated oils and saturated fats.

Eggs are back in fashion, consumed in moderation. That means a limit of three to four egg yolks a week, although there is no limit on egg whites. A good trick when preparing an omelet or scrambled eggs is to use two egg whites for every one yolk. Chocolate lovers should stick to dark chocolate with at least 50 percent cocoa, information that should be on the label.

However, red and processed meats should be limited to one three-ounce serving a week. And those cherished treats and desserts — pastries, cakes, doughnuts, cookies, pudding, French fries, potato chips and all sweetened and diet carbonated soft drinks — are best avoided altogether. Carbonated water is fine. So is wine, especially red wine, with a daily limit of five ounces for men and three ounces for women consumed with a meal.

Likewise, avoid high-fat dairy products, including whole and 2 percent milk, butter and ice cream, and limit the consumption of cured and fatty cheeses to one serving a week — about the size of four dice. I recently discovered a delicious alternative to cream cheese and Neufchâtel. It’s a creamy mixture of fat-free Greek yogurt and cream cheese with only three grams of fat and 60 calories in two tablespoons. Look for it where regular cream cheese is sold.

Of course, what you eat is only half of the health-saving story. Regular physical exercise is a critical ingredient, even if it doesn’t result in weight loss.

Promoted
Listen to the latest songs, only on JioSaavn.com
He urges parents to establish heart-healthy habits early. “Patterns for physical activity are set by ages 6 to 9, and healthy eating habits by ages 9 to 12; together, they can result in a much lower risk for developing heart disease as adults,” he said.