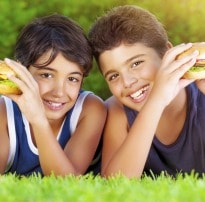 Is your child gaining weight even after actively participating school sports? Researchers have now found that the unhealthy food that they are often treated to after the games may make them fatter.

Because of the unhealthy snacks and sugar sweetened drinks that they are served after the training or a match, the children may actually end up consuming more calories than what they burn while exercising, the researchers said.

Comments The study involved boys aged eight to 11 who participated in games at a youth baseball field in the US. Most snacks served after the games were high-calorie food items included French fries, sweets and cookies and sugar-sweetened drinks. The study appeared in the journal Childhood Obesity.