Why Dark Chocolate is Good for You 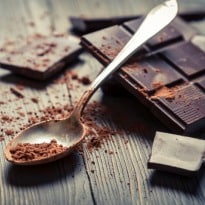 Are you a dark chocolate addict? Here's a good reason to chomp on those irresistible bars. A new research suggests that eating dark chocolate lowers the augmentation index - a key vascular health predictor - and reduces adhesion of white blood cells to the vessel wall, thus promoting overall healthy heart functions.

Dark chocolate helps restore flexibility to arteries while also preventing white blood cells from sticking to the walls of blood vessels. Both arterial stiffness and white blood cell adhesion are known factors that play a significant role in atherosclerosis.

"The research provides a complete picture of the impact of chocolate consumption in vascular health and shows that increasing flavanol content has no added beneficial effect on vascular health," explained Diederik Esser, a researcher from Wageningen University, the Netherlands.

"However, this increased flavanol content clearly affected taste and, thereby, the motivation to eat dark chocolates. So the dark side of chocolate is a healthy one," Esser added.

Esser and colleagues analysed 44 middle-aged overweight men over two periods of four weeks as they consumed 70 grams of chocolate per day. Study participants received either specially produced dark chocolate with high flavanol content or chocolate that was regularly produced.

Promoted
Listen to the latest songs, only on JioSaavn.com
During the study, participants were advised to refrain from certain energy dense food products to prevent weight gain. "The effect that dark chocolate has on bodies is encouraging not only because it allows us to indulge with less guilt, but also because it could lead the way to therapies that do the same thing as dark chocolate but with better and more consistent results," said Gerald Weissmann, editor-in-Chief of The FASEB Journal that published the study.

Until the 'dark chocolate drug' is developed, we will just have to make do with what nature has given us," said Weissmann.