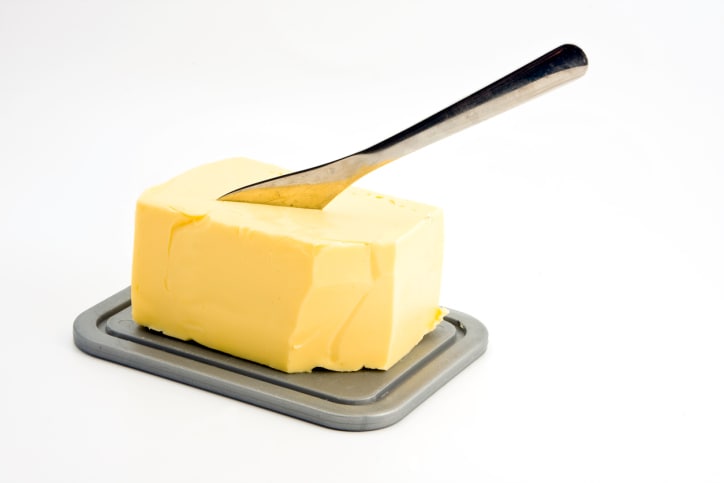 Made from churning cream, butter adds the soppy richness and tender texture to cakes, pastries and biscuits. It is an everlasting delight in any cuisine. It is usually served as a spread or used a condiment while cooking. Frequently made from cow's milk, it contains butterfat, milk proteins and water. Butter can also be manufactured from other milk yielding mammals like sheep, goat, buffalo and yaks. Though it usually pale yellow in colour, it also varies from dark yellow to white. The unmodified colour of butter depends on the animal feed. However, it is usually tampered by the addition of food colouring during the commercial manufacturing process. It remains as solid only when refrigerated.

There are majorly two types of butter that are consumed - salted and unsalted butter. The unsalted butter comes in almost every cooking job, from baking to cooking. It contains at least 80% of milk fat. Salted butter is commonly reached while eating bread. It is the same as the unsalted butter but with addition of salt.

Other varieties of butter are whipped butter which is best used for spreading on toast because it has some gas blended during the manufacturing process.

European-style butter has a little extra milk butter than the standard one, producing the tender and fluffy cakes.

1. The principal constituent of butter is milk fat, compromising on excessive consumption.

2. It has also contains traces of lactose and a good source of Vitamin A.

Butter adds only to 3% of the entire fat in the US food supply.

Romans and Greeks applied butter over their hair to make it look shiny.