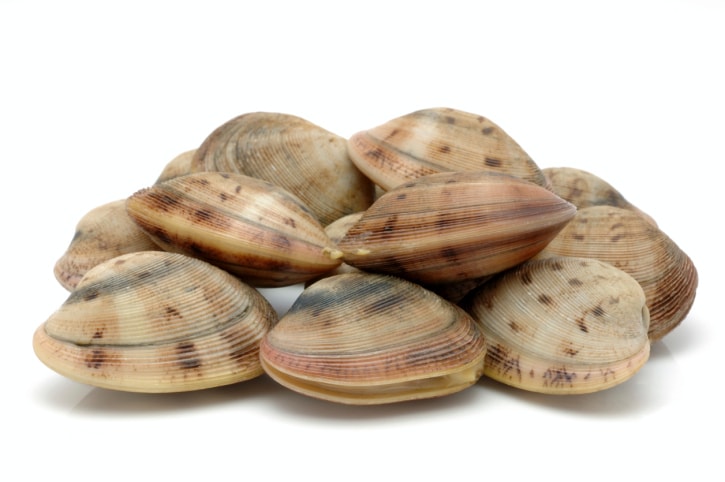 Clams are two-shelled molluscs related to the same family of scallops and oysters. They are usually found in the coastal water and shallow freshwater lakes. Most varieties of clams are edible. Secured between two hard shells, is the soft body.

Though there are more than 2,000 varieties, clams are broadly classified into two types: Hard-shell clams that dwell under deep waters whereas soft-shell clams reside in tides. Soft-shells are usually not eaten raw. They also have a neck-like siphons sticking out making the shell not getting closed completely.

Quahog clam is a round clam which is eaten raw and in chowders depending on its size. Quahogs are born male and turn female as they mature. It is a hard-shell clam. Clams have a prominent place in various cuisines. In the east coast of the United States, hard-shell clams are very popular. They are eaten raw, boiled, steamed or fried.

In the Italian cuisine, clams are added as an ingredient in mixed seafood dishes, or eaten together with pasta. Clams have become so regular in Italian culinary that they are on the verge of extinction. In India, Clams are eaten in the coastal regions, especially in the Konkan, Karnataka, Bengal and Kerala regions. In most regions, clams are served as curries and side dishes.

1. Unlike most seafood, clams have a relatively low mercury content that makes these invertebrates edible.
2. Clams are a good source of iron which strengthens the immune system.
3. Clams contain saturated fat content which is good for people with high cholesterol.

The clam has no head, no mouth parts and no arms, or legs.
Hard-shell clams lifespan is over 40 years.
Clam shells were also used for making tools such as scrapers, knives, spoons and hoes.