Corn is another name for maize. Corn is used all over the world in different forms, eaten cooked or raw. It is a cereal grain. 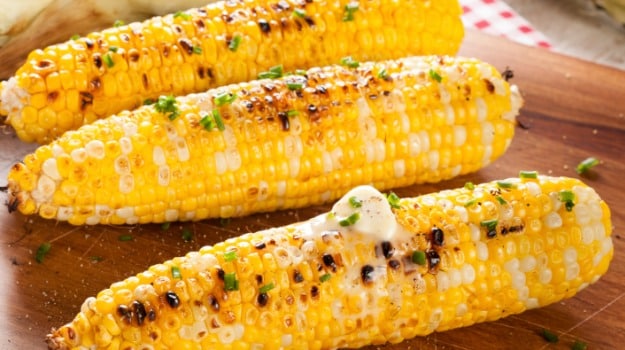 Corn is another name for maize. Corn is used all over the world in different forms, eaten cooked or raw. It is a cereal grain. They are bright yellow in color. Corn on the cob is a delight during monsoon. The seeds of maize are called corn kernels or sweet corn because of their sweet and milky flavor. Corn and the flour made from it known as cornmeal are a staple food in many regions.

Corn is consumed as a popular staple food in many countries. It holds a very important place in the Mexican cuisine. Maize meal is an excellent substitute for wheat flour while making cornbread and other baked goods.

Maize is also a major source for starch. Maize flour is a major ingredient in every household kitchen. The kernels can be roasted or boiled and are eaten as a popular snack in India.

The unripe kernels are grated off the cob and served as a vegetable in a variety of dishes like Maize purée, tamales, cakes, ice-creams, etc.

It is also used to make cornflour (a thickening agent), corn oil, corn syrup (a sweetener) and also a type of American whiskey called Bourbon.

Note: Consume the fresh corn within a day but if you want to store it keep the husks intact so that it stays fresh. While boiling corn, do not add salt to the water, it will only toughen the corn. While cooking, be careful not to overcook the kernels as it will make them lose its sweet flavor.

1. Corn is a great source of starch and Vitamins B and C.
2. Vitamin A in maize functions as an excellent antioxidant preventing diseases.
3. Maize also promotes proper functioning of the gall bladder and reduces acidity.

Maize is also used bio-fuel.
It is estimated that corn has been under cultivation since 5,000 years.