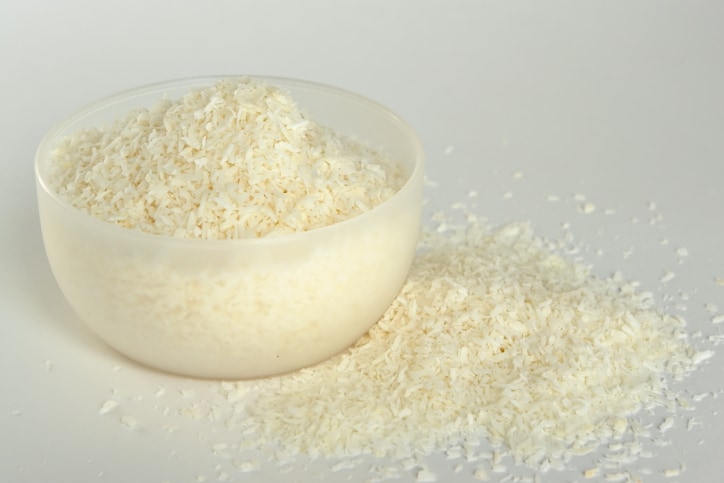 Coconut meat which has been shredded, chipped or powdered and then dried out is called desiccated coconut. It is prepared by removing natural moisture in the coconut fruit. It has a snow white appearance with a fresh sweetness and nutty flavor. Desiccated coconut is also available in a sweetened, toasted or toasted sweetened variety.

It is used in making cookies, cakes, pastries, desserts, puddings or any other coconut based recipe where raw grated coconut cannot be used.

Dried coconut can be consumed as a snack, in cereal, baked goods, salad, smoothies or sauteed with vegetables. In many regions of South India, grated coconut is used as a garnish in several traditional dishes. It is also available in an unsweetened form.

1. Desiccated coconut has a very high fat content but low cholesterol and sodium.
2. The health benefits of a desiccated coconut are similar to that of fresh coconut but there is a slight loss in nutrients due to the preservation process.

India is the largest coconut producing country in the world.

THIS WEBSITE FOLLOWS THE DNPA CODE OF ETHICS© 2020 NDTV Convergence, All Rights Reserved.
Listen to the latest songs, only on JioSaavn.com