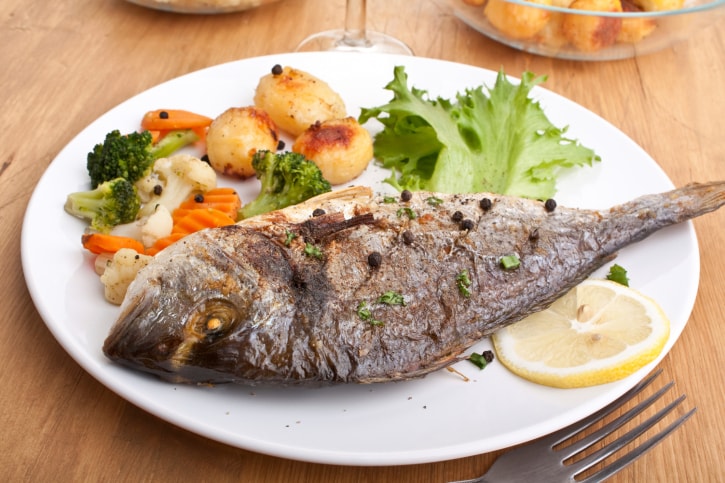 A limbless cold-blooded vertebrate with gills and fins and living wholly in water, it is a very popular seafood consumed with great interest all over the world. Fish should be stored in the coldest part of the refrigerator. Ideally, it should be consumed the same day but can be stored the freezer for not more than 2-3 days.

Freshwater fish: This type of fish spends most of their lives in fresh water, river and lakes and is less saline than sea fish. Commonly consumed fresh water fish in India are sardines, catfish, red snapper and barracuda.

Sea fish are said to be healthier than fresh water fish as they contain more omega 3.

Herbivorous fish are the ones that feed only on plant water whereas carnivorous or predatory fish feed on other fish and animals. Shell fish and catfish are examples of some herbivorous fish. Perch musky, walleye and salmon are common predatory fish, whereas Tuna and sharks are the predatory fish that are commonly consumed. A predatory fish - snakehead, also called channa or parachanna in Asia and Africa, is considered a valuable food though it is illegal in US because they have been recognized as an invasive species.

In oily fish, the oil is distributed throughout the body and so it is said to be more nutritious than white fish. The amount of Omega-3, selenium, phosphorous, Vitamin b-12 is more in oily fish but white fish has less fat content and is therefore preferred by people watching their weight. Mullet, shark, snapper and cod are a few examples of white fish whereas anchovies, sardines, salmon, sardines, pilchards, mackerel and tuna are examples of oily fish.

Rich in omega-3 fatty acids, consuming fish helps in improving the brain and eye functions. It helps in the development of brain and nervous system and also lowers cholesterol, preventing heart diseases. Our body cannot produce omega fatty acids and fish is its best source.
Fish oil can help prevent arthritis.
Selenium in fish is known to have cancer fighting properties.

Fish is a primary source of animal protein in many developing countries.
About 75 percent of the world fish catch is used for human consumption.