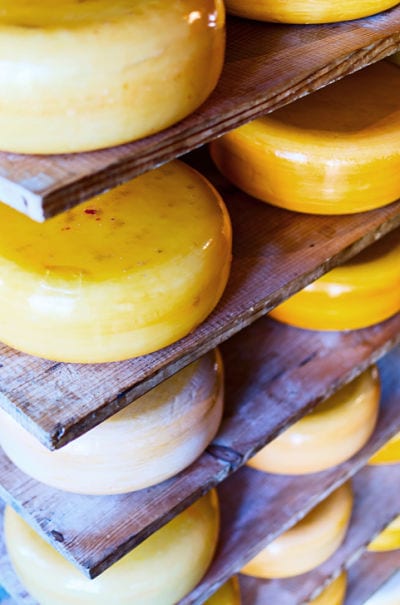 It is a yellow Dutch cheese made from cow's milk. The cheese is named after the city of Gouda in the Netherlands. It is a semi-hard cheese popular for its rich, unique flavour and smooth texture. Gouda is made from pasteurized cow's milk but some varieties are also are made from sheep or goat's milk. The texture of gouda cheese varies from semi-hard to hard.

The types of gouda cheese are -

Boerenkaas- It is a traditional variety of gouda cheese produced from unpasteurized cow's milk.

Overjarig- It is a full-flavoured, hard and salty cheese.

Other types of gouda cheese includes Jong, Jong Belegen, Belegen, Extra Belegen and Oud. Younger Dutch gouda cheese can be identified by yellow, orange, or red wax rinds while the white mature cheese has black wax coverings. Younger goudas (aged between one and six months) taste creamier and have a yellow wax coating. Older one are saltier, more pungent in taste and harder in texture.

Young goudas go best with beer. A well- aged Gouda complements wines with deep, rich flavours. It can shredded, grated, sliced, cubed or melted. It may be used as a table cheese or a dessert cheese. Gouda is available in large wheels weighing between 10 and 25 pounds.

Gouda cheese is good source of protein, calcium and phosphorus. It is low in sugar but it is high in cholesterol and saturated fat.