It is a popular Indian crop belonging to the grass family, Gramineae. It is similar in appearance to corn. It grows anywhere between 2 8ft tall. It has strong roots which extend up to 2.5mtrs below ground. After wheat, the maximum amount of cultivated land in India is used for growing Jowar. 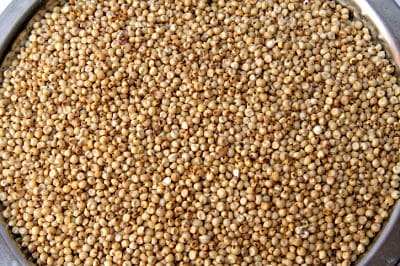 It is a popular Indian crop belonging to the grass family, Gramineae. It is similar in appearance to corn. It grows anywhere between 2 - 8ft tall. It has strong roots which extend up to 2.5mtrs below ground. After wheat, the maximum amount of cultivated land in India is used for growing Jowar. It is grown in warm areas and is used as food as well as fodder. It is a highly nutritious crop and is recommended as feed for cattle as well.

It is the 5th most important cereal crop grown in the world. It is cultivated in areas which have regur soil as it needs a clayey ground to yield properly. It is extremely resistant to drought.

It is mainly a rain-fed crop grown through broadcasting and needs anywhere between 30cm to 100cm of rain to grow properly. In India it is very popular in Maharashtra, Andhra Pradesh, Tamil Nadu and Karnataka. Africa is the largest producer of jowar in the world.

Organic varieties of jowar are also available and very popular. Organic farming involves a system of production in which natural fertilizers are used and there is no use of toxic pesticides, which pollute the harvest and the ground. Organic Jowar is gluten-free, easy to digest and provides more energy for the calories consumed.

It has a somewhat plain neutral taste and is known to absorb flavors. It might have a slight sweet after taste.

Jowar kernels can be steamed and boiled. It can also be added to soups and stews or ground into a flour that can be used as a substitute for wheat flour in baked goods, pancakes or chapatis. It may be cooked as a breakfast porridge. The jowar flour can be mixed with others to make multigrain flour. Popped over fire or roasted jowar kernels are eaten as a snack with seasoning.

Jowar has high-protein, is cholesterol-free source of a variety of essential nutrients, including dietary fiber, iron, phosphorus and thiamine.

It is a great substitute for people with celiac disease or wheat allergies. It keeps bones and teeth strong by providing energy to the body. It is a good source of vitamin B.

Caution: The young plants of many species are poisonous. Jowar might contain tannins that prevent the body from absorbing the nutrients. Therefore it is advised to remove the seed coating before consuming and eat only the inside whitish kernel.