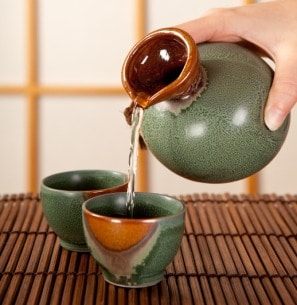 Also known as rice wine, sake [Sah-Keh] is a traditional Japanese alcohol. Although named rice wine, it is made using a process, which resembles the brewing of beer or fermentation. It is produced from rice and has a dry pungent taste but there are sweeter varieties available as well. The rice used for brewing sake is called shuzō kōtekimai (sake rice). The grain is larger, stronger, and contains less protein and lipid than the ordinary rice eaten by the Japanese.

Sake can be consumed chilled, warm or hot depending on the consumer’s preference and on the weather. Sake is served in a small, usually ceramic carafe called a tokkuri. It's usually bulbous with a narrow neck, but there are other types, such as katakuchi, which looks somewhat like a tea kettle.

Sake is sipped in sake cups. If served chilled, it's a glass cup and carafe while for warm sake it's a ceramic carafe (shaped more like a narrow-necked flower vase) and ceramic cups, which have a definite stem.

The taste of Sake depends on achieving a balance between sweetness and acidity, a balance that can be maintained only through the combination of proper water, malt, yeast and steamed rice. This balance cannot be assured by technology, but only with the experience of skilled artisans who have special insight into the subtleties of minute changes in climate, rice and water.

Tip:Sake can be served chilled, at room temperature or heated but high-grade sake is not served heated or it loses its flavor and aroma.

Sake is good for the skin, can help prevent Cirrhosis and fermented goods are essential for the body.

Unlike wine, beer, and orange juice, saké is sulfite-free.  About 1% of the general population and 5% of asthmatics suffer a reaction from sulfites, often resulting in severe headaches.

In premium saké, rice is milled to such a high degree that most congeners are eliminated; congeners are the impurities and byproducts of fermentation in alcoholic beverages thought to cause hangovers. Saké has a much lower acidity than wine.

Sake has a variety of ceremonial uses in Japan.

Sake is mentioned several times in the Kojiki, Japan's first written history, which was compiled in 712 AD.