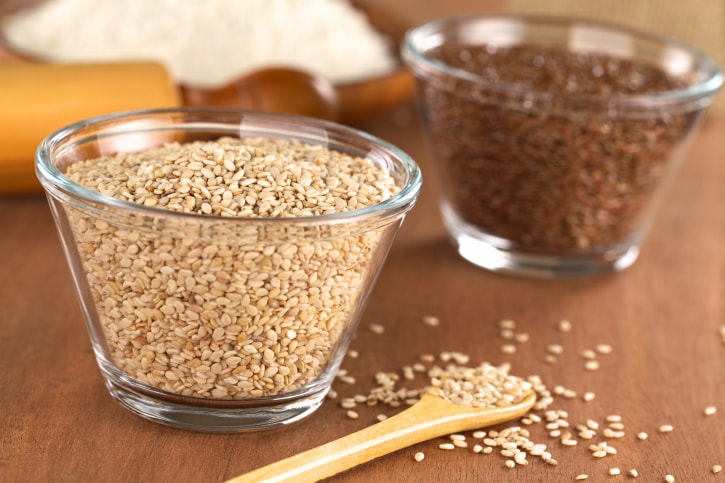 These seeds from the sesame plant have a nutty flavor. The husked ones are called white sesame and the un-husked are black. They are widely used in Indian, Chinese, Japanese and Korean cooking. With a crunchy texture and a nutty taste, they are added to many dishes for the extra flavor. Sesame seeds are tiny flat oval seeds and come in a variety of colors: white, yellow, black and red. Sesame seeds are the oldest known oilseed and have the highest content of oil than any other variety of nuts. Sesame seeds are drought tolerant and are able to grow where most other seeds aren't able to.

Black sesame seeds: The best to make oil from, the black variety also has higher medicinal value and flavor. They also have a nutty taste and are used in several dishes and as crispy garnish.

Red sesame seeds: Their iron content gives them the red color, they are very healthy.

Golden sesame seeds: Pleasant aroma and rich taste, it is best used in common foods to give a crunch.

It is commonly used in bakery products and once toasted, in ice creams and chocolates. Raw, it is used as seasoning for food and to give it a crunch. They are also blended with water to make a sauce or dip or used to make butter.

It may be included in the batter to make breads, muffins and cookies.

It is used extensively in Chinese cuisine and is usually sprinkled on top of various dishes as a flavor enhancer.

They are a store of various minerals and vitamins. Sesame seeds are known to reduce cholesterol levels and prevent high blood pressure. It also protects the liver from damage.

Along with Manganese and Copper, they are also a rich source of calcium, magnesium, phosphorus, iron, zinc, vitamin B1 and dietary fiber.

It helps to reduce cholesterol levels in humans.

According to Assyrian legend, the Gods drank sesame seed wine while making the world. Use of sesame seeds in baked goods is depicted in Egyptian tomb paintings.