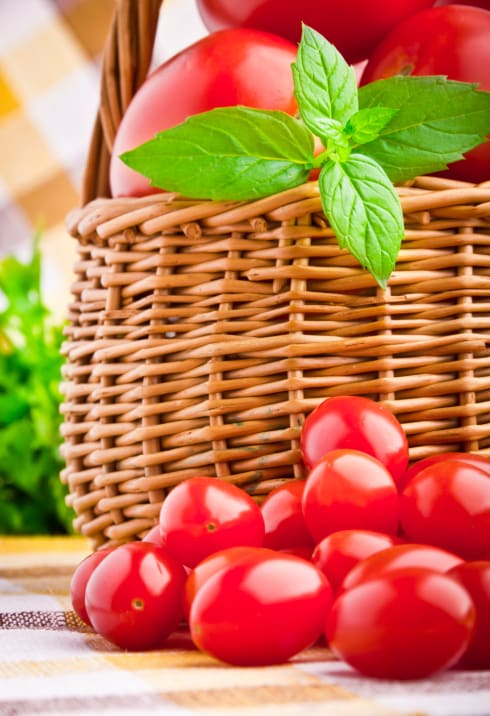 Though botanically a fruit, Tomato is often regarded as a vegetable. Having originated from Mexico, this fruit belongs to the nightshade family. The English name Tomato is originated from a Spanish name Tomate. Tomatoes are a versatile fruit and greatly used in diverse meal courses in varied forms. The tomato belongs to the nightshade family. Tomatoes when unripe are green in colour and firm, as they ripen they change shade to red and become softer.

Storing tomatoes in refrigerator harm the flavour of the fruit. Because of their acidic content, it is easy to preserve the fruit at home. Tomatoes are rich in lycopene which has health benefits.

Tomatoes are used to make ketchup or tomato sauce which is widely used across the world. Tomato ketchup is almost an indispensable part of any sandwich, burger, pizza and pasta.

They are rich in potassium and are cholesterol free. Tomatoes get their colour from a chemical called lycopene. They are in fact the richest source of lycopene which is known to have anti-cancer properties. Tomatoes help to unblock pores leaving your skin soft. This is due to the high amounts of vitamin C. these fruits also aid in vision improvement due to the high concentration of vitamin A.

China is leading producer of Tomato producing an estimate of 34 million tonnes.

In 1500s, Europeans considered Tomato to be a poisonous fruit, suspicious of its bright red colour.

When tomatoes were introduced in 1500's in Europe the Germans called it 'the apple of paradise' and the French called it the 'apple of love'.

Tomatoes are the most widely used canned vegetable. There are over 10,000 varieties of tomatoes.