Vanilla essence is extracted from vanilla beans and is used to flavor several desserts and dishes. It is the extract that is made from vanilla beans which are soaked in alcohol. It is widely used as a flavoring and vanilla ice cream is the most common flavor. 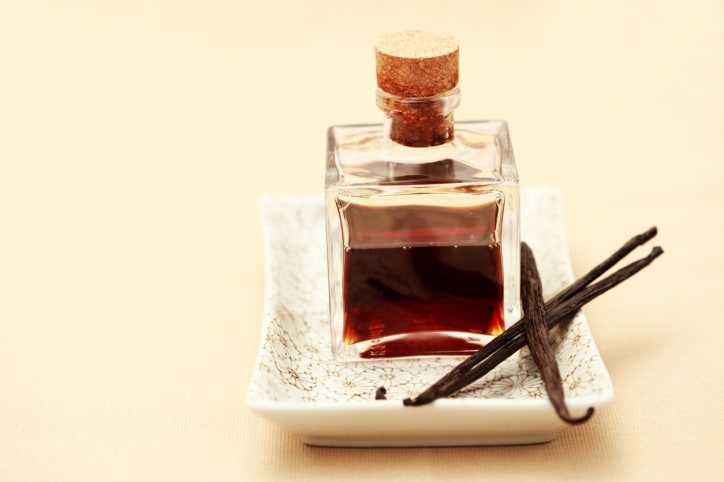 Vanilla essence is extracted from vanilla beans and is used to flavor several desserts and dishes. It is the extract that is made from vanilla beans which are soaked in alcohol. It is widely used as a flavoring and vanilla ice cream is the most common flavor. It is used for both commercial and domestic purposes. After saffron, vanilla is the most expensive spice used. Vanilla is the most labor intensive of all agricultural products and that is why it is little expensive. Vanilla originated in Mexico. Natural vanilla essence contains 2% to 3% of alcohol. Coumarin is a common adulterant of vanilla essence which can prove to be harmful for the liver if in taken in a large amount.

Always add vanilla essence in the food after it has been removed from the flame, so that the flavor of vanilla does not dissipate. Using too much of flavoring agent in any food can lead to a bitter aftertaste in the food.

The most common types of vanilla are Indonesian, Bourbon, Tahitian and Mexican.

Color: The color of pure natural vanilla essence is clear Amber.
Alcohol content: Synthetic Vanilla either contains 2% or no alcohol at all.

It is used in baked goods, beverages, custards and even some savory foods like sauces or vanilla scrambled eggs. Vanilla essence is not just used to flavor desserts but is also used in some hot beverages to add flavor like in tea, coffee or even milk. Used in various drinks like Irish cream and low fat banana shake. Vanilla can be used for medicinal purpose also. Vanilla helps in relieving pain caused from burns.

1. Vanilla has aphrodisiac properties
2. Vanilla also has sedation properties. Vanilla being an aromatic spice is beneficial for the nervous system. It is proven to be helpful in reducing symptoms of claustrophobia.
3. Vanilla is rich in antioxidants. It helps in reducing the free radicals in a body which if present a large amount in a body can even cause cancer.

Vanilla extracts has been used since more than 100 years.
The extraction process takes 48 hours.