Right after IPS Officer Mohita Sharma Garg won the one crore rupee prize money, she opened a packet of noodles to find two sachets of masala inside. 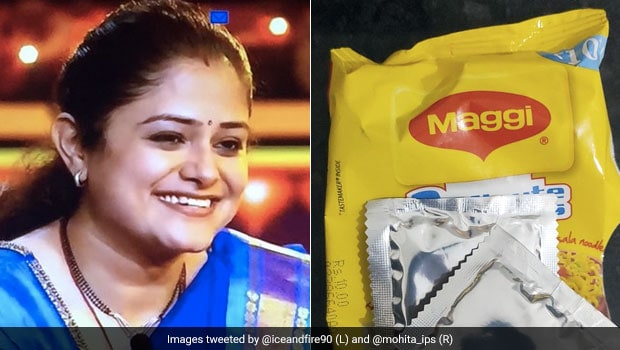 We have often heard instances of people on a 'winning streak', with luck showering on them in a number of different ways. These random encounters are often referred to as a person having a 'stroke of luck'. But a recent incident has proven that this is more than just a whim or a saying. Kaun Banega Crorepati (KBC) Season 12 is currently on air, and the popular Hindi game show hosted by actor Amitabh Bachchan had found a new 'crorepati' in IPS Officer Mohita Sharma Garg. Turns out winning the prize money wasn't the only lucky event that happened in her life. Take a look at the tweet she shared:

Just after winning #KBC12, got 2 masala sachets in 1 #maggi packet. Never thought would get so lucky.
God is kind today???? ????????????????@GargRushal_IFS@SrBachchan@SonyTV@NestleIndiapic.twitter.com/9NMmbCJm2k

Right after IPS Mohita Sharma Garg won the one crore rupee prize money, she opened a packet of noodles to find not one but two sachets of masala inside. "Never thought would get so lucky. God is kind today," she wrote in a hilarious tweet which has now gone viral garnering more than 3k likes on the micro-blogging website.

Users couldn't help but react to the amazing stroke of luck going on in Sharma's life. Many congratulated her on the find, calling it 'the real jackpot' and 'a godsend'. Other users wanted to know where she purchased the miraculous packet of noodles which contained two sachets of masala for an extra edge of spice. Few users also mentioned that the extra sachet in Mohita Sharma's packet meant that someone else wouldn't have received a sachet at all. Take a look at some of the reactions:

Don't know for which thing should I congratulate?
Double Maggi Masala or 1Crore.. pic.twitter.com/nUGtGxkBx4

Perhaps, you have developed Midas Touch... ????

Winning KBC was ok.... but getting 2 sachets is really an achievement. ALMOST NO ONE has come across person with 2 sachets. It's a god send ????

We hope such lucky instances fall in the kitty of more netizens, to spread some positivity and happiness. What's the luckiest thing that has happened to you recently? Tell us in the comments below!