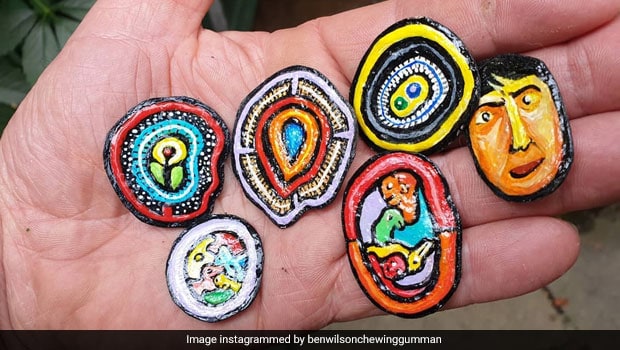 Food is an art, and most foodies would agree. Every dish that is created is as unique as a work of art. It takes an equal amount of skill to be an artist as it takes to cook up a great dish. A British artist, Ben Wilson, takes chewing gums stuck on London's pavement and turns them around to make beautiful street art. He is also known as 'The Chewing Gum Man' as his novel way of recycling chewing gum has caught the eyes of many. Although his canvas may seem disgusting to some, the innovative idea of converting chewing gums into paintings is truly something to admire. Take a look at some of his creations:

Every creation made by Ben Wilson is unique in the sense that chewing gum shapes can clearly never be the same. His designs are also eclectic and vibrant - catching the eye of passers-by and onlookers. People would earlier turn their eyes away from the sight of chewing gums stuck in public places, but these delightful little designs pique their intrigue and make them look longer. Ben Wilson takes a generous amount of time to make sure every design is perfect. His chewing gum paintings feature intricate details that can only be caught after a decent time is spent looking at them. People often find him bent over a flattened chewing gum with his box of paints.

The British artist has been transforming the public landscape of London for the past 15 years. His 'hidden art' all across the suburbs is there for everyone to see, and often without a signature. Ben Wilson began a long-running campaign for crowd funding his book capturing every work he has made. He got more than the required funds to publish his book and released his paperback in December, much to the elation of his fan following. This is truly an initiative that makes the best of waste by changing it into something wonderful while caring for the environment!