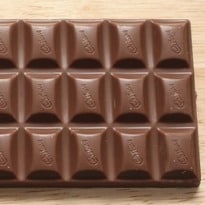 We associate roundness with sweet tastes and angular shapes with bitterness. The Dairy Milk recipe is unchanged, but have you detected a difference since the corners were smoothed off?

How time flies. A whole year has passed since Cadbury smoothed the corners off its Dairy Milk bars, shaving 4g off each serving and zero pence off the price. But it seems that customers are most up in arms about how the new bars taste. "Cadbury facing revolt over new Dairy Milk" read a recent headline. (From what I can gather, the only evidence of a "revolt" is a thread on Mumsnet and an online petition with 24 signatures. Plus, the Grocer reports that Dairy Milk sales are actually up over the past year, but let's not let mere details get in the way of a good story about what one Mumsnetter called the "cultural vandalism" of a chocolate bar.)

Some of the disgruntled chocolate fans have complained that the new curvy chunks are too sweet, provoking Cadbury spokesman Tony Bilsborough to defend the innovation: "We have been very clear and consistent that we have not changed the recipe of the much-loved Cadbury Dairy Milk," he says, before revealing that the thinking behind the round shapes is that they'll melt in the mouth better. "Your mouth is not square, so why should the chocolate be?" another company rep reasoned in the Grocer article. BECAUSE IT HAD BEEN SQUARE SINCE 1905, YOU FOOLS.

If Cadbury (now owned by Mondelēz International, formerly Kraft Foods) is to be trusted regarding the precious recipe, can the new shape really be affecting the chocolate's taste? Well, watching from the sidelines with a wry smile is the sensory scientist Charles Spence. He has studied this stuff ad infinitum and has found that we do indeed associate roundness with sweetness. "People make consistent matches between shape properties," he says.

As far as chocolate goes, people will match the sweeter taste of milk chocolate with rounder shapes, while matching the more bitter taste of dark chocolate with shapes that are more angular. "The generalisation that has now been documented across a range of food and beverage products," he continues, "is that sweet is round while bitter is angular." This is usually tested using something akin to Spence's scale. Participants taste the food and mark the scale according to how they think it reflects the taste. The image below carries the results of a chocolate tasting overseen by Spence.

While circles are sweet, triangles and stars are bitter, as well as associated with fizz - which isn't a taste, but a touch. Bitterness and bubbles do sort of make us wrinkle our noses and recoil a little, even if we like them, so it makes sense that they would be symbolised by pointy, sharp shapes.

Sounds have shapes and tastes

Spence and his team asked the subjects of one study to liken both shapes and speech sounds (in the form of pseudo-words) to chocolate samples with varying cocoa content. Lindt extra creamy milk chocolate (30% cocoa) and Cadbury Koko milk chocolate truffles were both, unsurprisingly, more strongly associated with rounded shapes, but they were also matched with softer-sounding, lower-pitched mock words, such as "maluma". By contrast, Lindt 70% and 90% cocoa chocolates were more strongly associated with angular shapes and sharper sounds, such as "takete". I'd never really thought about this before but, now they mention it, it does seem about right.

This intel is of great value to food and beverage marketeers (and they're usually the first to know this stuff), but it could be used to everyone's advantage. As Spence points out, it should have been possible for Cadbury to reduce the sugar content in the rounder Dairy Milk a little, while consumers' perception of the taste remained unchanged. "Surely a win-win situation," says Spence, with an eye on the nation's waistlines.

Personally, I like the resistance the square chunks provided, making for either a good, satisfying chew, or a long, slow melt. Does it taste different to you?