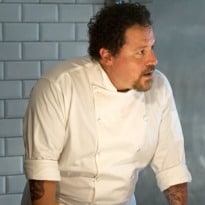 "And I," he declares, "am a member of the former category."

That will be obvious to anyone who watches this weekend's new film "Chef," which Favreau wrote, stars in, and directed, and which displays food in a luxurious, almost religious way. Critics have, perhaps justifiably, noted a lack of complexity in both plot and characters, and an overly sunny denouement. But one can't deny the film's appeal to the taste buds.

Even a simple grilled cheese sandwich, meticulously prepared by a father for his young son, is almost too delicious to look at, and evokes immediate empathy for this divorced dad trying to make a connection with his child in the most elemental way: through his stomach.

And it makes ours growl. Which is what Favreau was going for.

"There's something hypnotic to me when I watch food being prepared on a cooking show, or in 'Eat Drink Man Woman,'" he says, referring to the 1994 Ang Lee foodie classic. "There's something incredibly compelling and cinematic about it. And it's amazing that it can actually make your mouth water."

Not all food films make the mouth water. Another entry this year, the recent "Tasting Menu," based at a fictional restaurant in Spain, fell curiously short in that regard. (Later this summer comes "The Hundred-Foot Journey," starring Helen Mirren.)

Of the many delectable contenders, besides the Lee film, foodies still swoon when they think of "Babette's Feast," ''Big Night," or the animated "Ratatouille," which culminates in the glorious preparation of that simple vegetable dish in the title.Likewise, "Chef" comes down to a simple dish: the Cuban sandwich.

Carl Casper (Favreau) is a gifted but volatile chef at a swank Los Angeles restaurant. His boss (Dustin Hoffman), orders him to play it safe on the very night a major food critic is coming. Reluctantly, he does, and predictably gets excoriated by the critic.

Things go way downhill, and Casper is fired. He rebuilds his life by going back to basics: sprucing up a filthy old truck and turning it into a temple for the perfect Cuban sandwich.

There's a popular view that Casper the chef is really Favreau the director, and the risk-averse restaurant owner a big studio honcho -- and "Chef," an independent film, the food truck. Favreau, who directed the "Iron Man" films, says that's only partly true -- he actually loves both genres.

Yet it's clear "Chef" is a labor of love for Favreau, who confesses that he was so inspired during filming, he's installing a full commercial kitchen in his home, including a wood-burning pizza oven, a flat-top grill and maybe one day even an outdoor smoker, for succulent brisket.

Still, making food work at home is different than making it work onscreen. How do you do THAT?

"I learned a lot about photography and sound design," he says. "It's partly about the music. Part of it is the lighting, and part is the way you color-time it," he says, referring to the process of adjusting the colors of a shot. "A slight change in color can make something look nauseating."


Favreau had help. Noted LA chef Roy Choi was the food consultant, on set every day. "If you do a commercial, the food gets sprayed with glycerin, and then gets thrown away," Favreau says. "But when you're dealing with a chef it's about honoring the food. And so everything we cooked, we served up afterward. When we broke down a pig, we parceled it up and sent it home with the crew."

There was also serious training involved, as John Leguizamo, who plays Casper's buddy and line cook, can attest. He spent a month doing research at a Manhattan restaurant. "It was hard, man," Leguizamo says. "So many sharp objects, hot burning items -- you make the wrong move, somebody's gonna get hurt."

But it was all for authenticity, Leguizamo says. Both actor and director speak of "Chef" as a passion project.

Which may explain that happily-ever-after ending. Favreau confesses to having injected a dose of his own life view. Describing it, he becomes surprisingly emotional, not above shedding a genuine tear.

Comments"You know, I think life's hard," he says. "And ultimately, I believe in my heart that if you're a hero in your own story, then there's a happy ending. "I do think life has a happy ending. I'll go on record as saying that."