Choose the Fish, and Kayal Cooks it Your Style 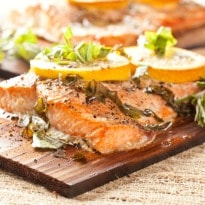 This is a sea food festival with a difference. All you need do is choose the fish and indicate how you would like it cooked, and wait. And the chef will present to you the fish you chose, cooked in the style of your choice.

"The festival concept is simple. The guest can choose the fish or other sea food he wants and the style in which it should be cooked. It is like buying your favourite fish at the bazaar/market place and asking your wife to cook at home," Kamath Ganesh, a chef at Kayal, told IANS.

There is more about Kayal that is not so common -- Swapan Kumar Baidya, the executive chef at Le Royal Meridien where this restaurant is housed, had considered being a fighter pilot. He has even flown a plane as a young man, but changed career course later.

"The career path changed. I wanted to be a fighter pilot. As a chef, I have flown to different countries," Baidya told IANS while discussing the sea food bazaar festival at Kayal (meaning fish in Tamil) the city's only five-star sea food restaurant.

One can literally splurge on a sea food diet at Kayal, while also enjoying the scenic view of green coconut trees, lawn and the swimming pool from its third-floor location. One also sees huge planes approaching the Chennai airport for landing.

Placed in front of the kitchen counter is a small catamaran/country boat on which there are bamboo baskets lined up containing different fish varieties - emperor, grouper, bekti, pomfret-black/white, octopus, shark, lobster, tiger prawn, squid, to name a few.Like in the market, a small placard announcing the price of the fish juts out of the basket.

According to Ganesh, though Kayal is a pure play sea food restaurant, the speciality is that all the fish at the festival are part of the morning's local catch.

"While there is a standard menu, the guest can choose the kind of style in which the seafood should be cooked," Ganesh said.

Watching a low-flying aluminium bird approaching the nearby Chennai airport, the executive chef says, as a conversation starter, that he can tell the direction of the wind just seeing the plane.

"A plane normally lands against the wind," he said while Ganesh brought to the table the brownish creamy aromatic lobster soup.

While a liberal dash of pepper to the soup spices it up, Baidya spices up the conversation by taking off from headwinds to the new competition, and plans of renovation of the 12-year-old property.

When it first started business, Le Royal Meridien was a trend-setter in the city's star hotel landscape, with its huge lobby/lounge, ball room, restaurants and also the huge underground parking lot.

"While the grandeur still exists, several new star hotels have come up during the past decade and it is time for us to go in for renovation," Baidya said.

With the mild spiced first lot of starters swimming down the throat fast, Baidya said the entire property - rooms, restaurants - will undergo renovation to comply with the guidelines of brand owner Starwood Hotels and Resorts.

According to current plans, the 38-seater Kayal will also be shifted to a different, larger location, and a new Asian cuisine restaurant will be added.

"While Kayal is open only for dinner now, there are plans to serve lunch as well in future," Baidya said.

The curry leaves masala friend prawn is a delight for those who want an extra tang of spice while the mackerel fish fry melts in the mouth.

Queried about the competition, Baidya said it was only natural for regular guests to try out the rooms and restaurants in the newer hotels, but after doing the rounds, they come right back, he said.

"In fact, many of the executives of the new star hotels used to stay at our property while theirs were under construction," he said, adding that the Le Royal Meridien and Kayal had good corporate patronage.

For the main course, Ganesh suggested lobster meat cooked in South Indian masala and saffron rice, and the combination hit the spot.

There was ginger chocolate cake with vanilla ice cream to follow, as dessert.

"Once the renovation of our hotel is complete, ours will be the latest property; others will be older. Then things will be different, as with tail winds," Baidya said, looking up at an aircraft climbing up into the air.

CommentsAt Kayal, a meal for two would cost upwards of Rs.5,000.