'Foodie' Brits admit to dining regularly on cereal and pasta 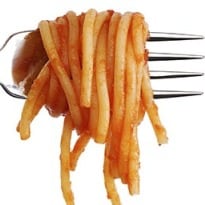 Despite popularity of cookery shows, almost half of British adults admit to relying on just a handful of meals, poll reveals

We may claim to be a nation of foodies, but a quarter of Britons admit they tuck into cereal for dinner at least once a week while just over a fifth rely on the contents of the biscuit tin for sustenance, new research reveals.

Despite the huge popularity of TV cookery shows and celebrity cookbooks, almost half of British adults have just a handful of meals that they rely on in the week, with a third regularly turning to basic pasta for their evening meal.

The poll of more than 1,000 adults found that Britons watch an average of 121 hours of food programmes on TV every year and own an average of nine recipe books. Yet 24% admit to eating cereal for dinner at least once a week, while 21% turn to the biscuit tin. The study by frozen food giant Birds Eye found that a third (33%) admit eating the same dinner at least twice a week. And 49% admit to depending on a handful of so-called "go-to" meals that they can prepare and serve in less than 30 minutes - and which they cook week after week. Pasta was by far the most popular of these (33%) followed by a jacket potato (11%) stir-fry (10%) and beans on toast (8%).

Researchers found 36% now consider themselves a foodie, with more than half (54%) stating that they actively seek out foods with big flavours and interesting twists when they do their grocery shop. Yet 39% confessed to being fed up with regularly eating the same dishes, while over half (54%) said they wished they could serve up more exciting meals for their family.

Over a third of Britons (37%) blamed their failure to cook on long working hours while half (51%) said they couldn't face clearing up the mess made by cooking a meal from scratch. Others complained of never having the right ingredients to hand (36%) and of fresh food going off by the time they wanted to eat it (20%).

Helen Martin, General Marketing Manager at Birds Eye, said: "Foodie programmes and celebrity cook books are a national obsession, but many of us simply don't have the time to try our hand at recreating delicious meals for ourselves at the end of a long working day. As our lives are becoming increasingly busy and time is such a precious commodity, it is clear to see from the research that we're reaching for products we can trust to create great tasting enjoyable nutritious meals quickly and easily."