Of Course we Don't Want to Eat Bugs. But Can we Afford Not to? 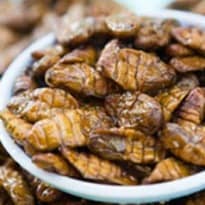 The idea of eating insects disgusts us. But meat is growing ever more expensive. Enter the marketing department...

We in western Europe are not going to be crunching down whole bugs any day soon, no matter what their most noisy enthusiasts and advocates say. Some cultural norms around food are simply too rigid, and head-on insects would be regarded as a meal too far.

In Britain the majority of the population can't even bear the thought of a langoustine, citing issues around beady eyes and spindly claws. The same people are hardly likely to look a dried locust in the face and call it lunch.

But protein from insects will eventually become a part of our diet.

As ever the key driver will be economics; the same economics that lie behind the horsemeat scandal. Meat is becoming increasingly expensive, beef especially so. This isn't some blip. The future is only for more of the same, as a rising global population puts a premium on cereals and grains, too much of which are fed to livestock.

At the same time grazing land will become scarcer and tensions over water will intensify. By the middle of the century as much as half the planet could be "water insecure"; letting cows and sheep drink what's left will seem obscene. Many experts believe that, to deal with the environmental impact of livestock, we will have to cut our fresh meat consumption by half.

And yet a hunger for animal protein will remain, which is where the insects come in. The current European Union-funded academic projects to liberate protein from insects - an environmentally friendly source on all measures -- will eventually result in a proprietary product that can be used as a substitute for conventional forms of meat in 'processed' items such as sausages, burgers and lasagnes.

The key to making this work will be one of the oldest and darkest of arts: marketing. These burgers won't declare themselves to be made with BugULike™ or Insectelicious™; the contents will list an ingredient called something like NaturesBounty™. And with that shiny marketing gloss consumers will eventually accept it, and fill their shopping trolleys. As with so many things in the end it will all come down to the price being right.

Picture: In Thailand, edible silkworm pupae are a delicacy; in Britain, even langoustine give some people the creeps. Photograph: Alamy

Jay Rayner's new book on the challenges of global food supply in the 21st century, A Greedy Man In A Hungry World, will be published in May.