Oven chip sales slump: is the end nigh for frozen frites? 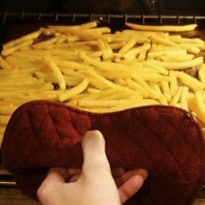 Rising prices and a hot summer have seen sales of frozen chips fall. But don't discount the ultimate comfort food just yet ...

Having chips for tea tonight? According to a current McCain ad set in a sunny, shiny, alternate-universe Britain, you're one of millions: grinning and skipping down yellow-brick roads towards those tubers, accompanied by the sounds of a gospel choir. But in the real world, all is not perfectly golden and fluffy. Frozen chip sales are down by 4.6% year-on-year. Could this slump mark the beginning of the end of Britain's long love affair with frozen frites, or is this merely a blip for chips?

Oven chips have always been seen as cheap, but recent price hikes have been putting off consumers. The average price of a bag has risen 17% year-on-year, according to The Grocer - bad news for families on tight budgets. Caroline Evans from the Potato Council says: "Over the past few years, large rises in energy costs, fuel costs and the minimum wage have all impacted on the cost of producing potatoes."

Last year's soggy spring and washout summer didn't help, either. Andrew Crook from the National Federation of Fish Fryers, which represents fish and chip shops, says: "2012 was the wettest year on record, resulting in the potato harvest being 23.9% down on the previous year. Stored potato stocks dwindled, resulting in high wholesale prices." Ironically, the sales slump caused in part by last year's wet weather was compounded by this year's long, hot summer. Bill Bartlett, McCain Foods' corporate affairs director, says: "Temperature has a key impact on frozen chip consumption, as consumers are less likely to use their ovens when the weather is hot. However, with the onset of the cooler weather McCain is expecting to see sales return to normal."

It is a similar story outside the home, as Brits ate 4.7% less chip shop, pub and restaurant chips in the year to June 2013. What's going on here? Are we swapping our spuds for kale and quinoa? I strongly doubt it. While chip sales are down, only a fool would count them out. For starters, a recent survey revealed that one in five people believe chips are more "British" than the Queen. We still managed to snarf 1.29bn servings out of home over the last year, 178m of them from traditional fish and chip shops.

As far as pubs and restaurants are concerned, we're living in a golden age - if you like your fries on the skinny side. Stefan Chomka, deputy editor of Restaurant magazine, says: "The revival of the French brasserie and the growth of national chains such as Côte, as well as the popularity of US-themed burger restaurants and grills, means there's been a move towards the serving of thinner frites and shoestring fries."

The best chips still have the power to "make" a gastropub or restaurant and start a trend. "The triple-cooked chip shot to fame in the 1990s thanks to Heston, and places like Tom Kerridge's Hand & Flowers continue to champion this style, though some triple-cooked fatigue has kicked in," says Chomka. "The trends prevalent at the moment are skin-on fries and sweet potato fries, as well as those with dustings of flavour added. And let's not ignore the potential revival of the crinkle-cut, the chip of choice at Shake Shack."

Cult fries are all well and good (and sometimes truly great), but I've got a big place in my heart for the oven chip. Gourmets may roll out the bunting in celebration of the recent sales slump, but to me, and millions of others I'm sure, that sack of straight-cut in the freezer is pure comfort food. They're a throwback to my childhood: school friends over for tea, chips with fish fingers and peas at the kitchen table, Blockbusters on the telly and Angel Delight for pud (before my mum calls in protest, I should add that this wasn't what we ate most nights).

Frozen foods are often fairly criticised (the horsemeat scandal is still fresh in the memory), but among their ranks, the chip is surely pretty inoffensive. With many brands coming in at around 5% fat, they're a lot less calorific than their chip shop and fancy bistro cousins. While they may never scale the giddy heights of Heston's triple-cooked, they also never plunge to the depths of the worst restaurant fries, all too often flaccid and anaemic, or the greasiest offerings from the chippy.

Cook oven chips for long enough and you're guaranteed a golden shell and reasonably fluffy centre, and even "crispy bits" among the smaller chunks from the bottom of the bag. Frozen chips are consistent, straightforward and unashamedly populist: the Ant and Dec of foodstuffs. And, like Ant and Dec, I don't think we'll be seeing the last of them any time soon.