The More We Learn on Nutrition, the More We Ignore 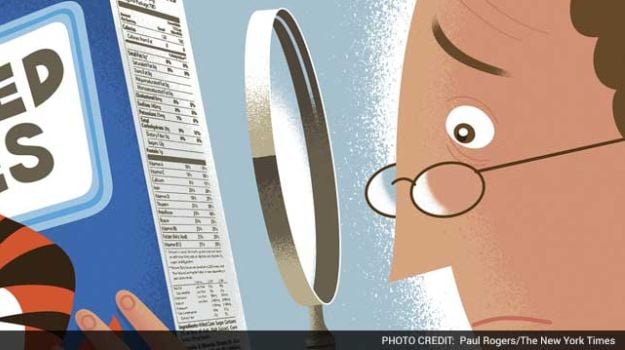 In the more than half a century that I’ve been writing about nutrition and health, I’ve witnessed many attempts to inform and improve the American diet, all the while watching young and old alike ignore sound nutritional advice and grow fatter and fatter.

Of course, individuals are not entirely to blame. The food and restaurant industries have done more than their share to lure people into bad eating and drinking habits. Stoking near-to-worthless breakfast cereals with added nutrients. Serving portions large enough to satisfy a racehorse. Selling snack foods and drinks in supersize containers, sometimes offered with free refills.

Purveyors of wholesome fruits and vegetables, beans and whole grains — even of meats, fish and poultry — can’t compete with the promotional billions spent by processed-food giants that sell products of little or no nutritional value.

Nutrition science has contributed as well. Consumers are justifiably confused by years of back-and-forth about the health effects of fats and cholesterol, the touting of vegetarian and vegan diets, the demonizing of dairy while cheese and ice cream — rich in fat, cholesterol and calories — enjoy a privileged exemption, among other such mixed messages.

In light of this, I’m really not surprised when a bright but significantly overweight young biology teacher I know, given a choice of two sides with her entree, selects mac ‘n’ cheese and fries over salad and coleslaw. I have heard more than a few people say things like: “Let me know when the nutrition gurus make up their minds and maybe then I’ll change my diet. Meanwhile, I’ll eat and drink what I like.”

Nor does it help when the foods and drinks people like cost less than the ones that provide needed nourishment without damage to body and mind. Or when producers of those damaging items take on public health officials as if they were cruel dictators trying to deny people their rights to buy whatever they please, even if it might kill them.

There is no better example than the campaign launched by the American Beverage Association that attacked New York City’s former mayor Michael R. Bloomberg when he tried, with the blessings of the Department of Health, to limit the sale of sugary sodas to 16 ounces, an amount that already exceeds the level some researchers consider toxic.

A 16-ounce regular Coke contains 54 grams of sugar — that’s 13 teaspoons, 200 sweet calories and nothing else of value except water. This amount of sugar represents the daily recommended limit of sugars from all sources, contained in one drink that does little to satisfy a person’s appetite. People still have to eat, and studies have shown that drinking one’s calories does not result in a corresponding decrease in food calories consumed, a fact that may also apply to those who drink multiple servings of wine.

New York did not embark on this venture without damning evidence. The mayor was hoping to contain the increasing size of New Yorkers and the costly health problems that ensue. A 2013 population survey by researchers at New York University of the city’s adults found that, compared with those who did not consume sugar-sweetened drinks, those who did took in 572 more calories each day from both drinks and foods.

Attempts to legislate a “sugar tax” on sodas were likewise beaten down (only Berkeley, California, succeeded on this one), although many communities have managed to restrict sales of sodas in school lunchrooms and vending machines, and several major eating establishments have removed soda as an option in children’s meals.

Still, although many health-conscious eaters shun fats, even wholesome ones like olive oil, there is at best a limited focus on sugars. Most so-called energy bars, popular among the health conscious as pick-me-ups on a hike or in the office, contain as much sugar as a regular candy bar. While some of the bars’ sweetening may come from fruit, most is added sugars, and it matters not whether what is added is honey, maple syrup, apple or grape juice concentrate, sucrose (table sugar) or high-fructose corn syrup (corn sugar). The new Nutrition Facts label will differentiate between natural and added sugars.

Healthy eaters tend to read labels, including the ingredients list, before they choose a processed food, regardless of how manufacturers promote it. Sugar is sugar, and the body handles them all the same when consumed in excess.

“When the intake of sugars exceeds the body’s need for energy and its storage capacity, the sugars are converted to fat in the liver, circulate as triglycerides in blood, raise blood levels of the ‘bad’ LDL cholesterol, reduce blood levels of HDL cholesterol, and are deposited as body fat,” Marion Nestle, a nutrition and food policy expert at New York University, writes in her new book, “Soda Politics: Taking on Big Soda (and Winning).”

Herein lies the makings of the “metabolic syndrome,” a glut of risk factors for Type 2 diabetes and heart disease: above-normal levels of sugar and triglycerides in the blood, a depressed level of good HDL cholesterol, and a thick waist often as large as or larger than the hips. A recent study by an international team found that even when it doesn’t cause obesity, drinking sugar-sweetened beverages can lead to Type 2 diabetes.

To be sure, sodas by themselves are not solely to blame. As Nestle states, “People who typically drink sodas tend to make other unhealthy diet and lifestyle choices.” Nonetheless, she traces a rather direct correlation between the rise in production (and therefore consumption) of regular sodas — from 27 gallons per capita in 1980 to 40 gallons in 2000 — and a doubling in the prevalence of obesity in the United States, from 15 percent to about 30 percent.

Promoted
Listen to the latest songs, only on JioSaavn.com
Consumption of regular sodas has since declined somewhat, and the size of Americans has leveled off, albeit at a much higher level than is healthful. Although Coca-Cola has promulgated the notion that lack of physical activity, not excess caloric intake, is responsible for the rise in obesity, leading independent researchers say otherwise. The average adult would have to walk about 2 miles to work off the calories in one 16-ounce soda (at which point, the walker might be inclined to down another soda).

The best way to reduce intake of sugars is to limit consumption of processed foods and drinks. Sugars are ingredients in three-fourths of packaged foods, and sugar-sweetened sodas contribute a full third of the total sugar in American diets, Nestle pointed out.