Who's the Prettiest of Them All? 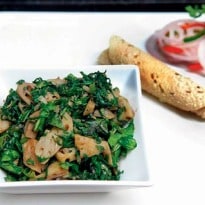 In a land far, far away, a woman set about ploughing her backyard. As did her neighbours. While the latter used watering cans and trowels to grow beautiful flowers, the woman used a shovel and hose to grow vegetables. Her daughter, mesmerised by the sweet fragrance of buds, believed that vegetables were ugly. When harvest time came, their garden yielded lots of ugly produce. The mother picked up a few crooked veggies and churned them into a flavourful broth, the aroma of which got the neighbours out on their porches, wanting to literally eat off that smell.

This is a scene from children's author Grace Lin's book titled The Ugly Vegetables. In reality, most of us are like the little girl mentioned in the story. "We get so fascinated by the waxy, smooth appearance of vegetables such as brinjals, shiny bell peppers and sweet-smelling corn, that we neglect underdogs such as jackfruits, white asparagus, turnip and other vegetables that don't look so presentable," says Chef Sameer Dighe from Sahara Star, Mumbai. Dhige believes that the phrase 'don't judge a book by its cover', applies aptly to ugly vegetables that need to be given a second chance to make an impression on us.

According to Chef Anuj Agarwal from Canvas, "One will never learn how to appreciate ugly veggies, unless one cooks with them." He points out that ingredients such as lotus root, that may not look so pretty on the outside, reveal a flamboyant inside when cut. It is rich in proteins as well. "When lotus root is extracted from the pond, it is covered in muck, but when it is cleaned and cut, a beautifully punctured pattern is revealed underneath. The ingredient works well with most cuisines, especially Kashmiri and Asian," says Agarwal. To help you get started, here are some pretty things you can make with these five not-so-pretty veggies.

Method:
In a pan, heat oil and sauté ginger-garlic and chilli pieces.
Add spinach paste and stir until it looks cooked.
Add the lotus root and cook it for another five minutes.
Season and finish with cream. Serve hot with rotis.

Tips:
Avoid lotus root with soft spots or bruises. Pick the one that is firm to touch.
It is best to pair lotus root with other vegetables that are tender to provide a textural variation.
Snow peas, asparagus and mushroom pair perfectly with lotus root.
Lotus root works best with stir fries, but since it absorbs flavours well, so you can add it to soups and broths too.
Store it after washing and removing surface mud.
However do not peel it until you are ready to use.

Method:
In a pan, boil white asparagus in salted water for 10 minutes.
Once it gets tender, drain and keep aside.
In a pan, take 30ml of vegetable stock and add 30g of butter to it.
Reduce until it thickens and season with salt and pepper.
Add the asparagus to it and cook it for 3-4 minutes.
To make the sauce, add ¼ cup of water in a saucepan and heat over medium heat.
In a separate pan, mix vinegar with onions and peppercorn and reduce it until it thickens.
Add egg yolk and whisk for two minutes or until the mixture becomes light and foamy.
Add few of lemon drops to it.
Place this bowl on top of the saucepan filled with water and mix it until it gets thick.
Remove the bowl from heat and add clarified butter, whisking constantly. If you add it too quickly, the sauce will split.
As the sauce thickens, you can gradually increase the rate at which you add butter.
Season as per taste and check consistency.
A finished hollandaise sauce will have a smooth and set texture. If it's too thick, adjust the consistency by adding a few drops of warm water.
Place the asparagus in the centre and pour the sauce on top. Garnish with black truffle slices and serve.

Tips:
To use white asparagus, you must first peel its outer skin. Make a small cut in the spear, about half an inch from the bottom and use a sharp knife to take off the outer peel.
Asparagus gets its white colour from etiolation, which is the deprivation of light. They are not as healthy as the green ones, so restrict their usage to salads.
White asparagus takes more time to cook.

Method:
Puree four rambutans and keep aside.
In a bowl, mix curd, fruit puree and sugar.
Add gelatine and let it rest.
In another bowl, mix biscuit crumbs and butter together to form the base of the cheesecake.
Press these crumbs evenly in a cake tin.
Pour the curd mixture on top and let it set in the freezer for 3-4 hours.
Once the cake appears set, remove from the tin and garnish with chopped pieces of rambutan and a sprig of mint. Serve cold.

Tips:
Even though rambutan looks like the litchee fruit, its taste is acidic and similar to grape. Therefore always balance out the flavour with extra sugar.
When stored, allow rambutan to cool to room temperature before using it to cook.

Method:
Preheat the oven at 220 degree Celsius.
In an ovenproof dish, place the broccoli and cauliflower florets. Top it with olives, pepper, salt and chickpeas.
Drizzle the mixture with olive oil.
Bake it for 20-25 minutes.
Garnish with cilantro and parsley before serving.

Tips:
Since the Romanesco broccoli has smaller and more intricate florets than the regular one, wash it.
Trim the florets into a uniform size, to ensure that they cook evenly.
Romanesco broccoli takes around 7 minutes to cook. Cooking further will make it lose colour.

Method:
In a pan, heat oil and add jackfruit pieces with the rice paste. Fry till mixture turns golden-brown.
In another pan, heat oil and sauté black cardamom and bay leaves.
Once cardamom begins to crackle, add the onions, ginger-garlic paste, tomato, curd, spices and sauté the mixture for seven to eight minutes.
Add the jackfruit and add a cup of water.
Transfer all the ingredients to a biryani handi and add green chillies, fried onion, mint leaves, coriander leaves, lemon juice and cook for two minutes.
Sprinkle saffron and drizzle some ghee on top. Cover the handi for 10 to 15 minutes. Serve hot.

CommentsTips:
Pick a jackfruit with a green exterior.
To store jackfruit for a longer period of time, you can freeze it or keep it soaked in sugar syrup (containing equal amounts of water and diluted sugar).
After using the flesh, you can use its seeds by roasting, boiling or baking them until tender.
Always coat the knife and your hands with vegetable oil before touching jackfruit. Raw jackfruit leaves a gummy residue.
Soaking jackfruit in cold water for 30 minutes before use will give it a good texture.