A Culinary Haven For Vegetarians, Swad Opens Its Second Outlet In Gurugram

Living up to their 'pledge to veg' idea, the restaurant serves all things veg and delectable! 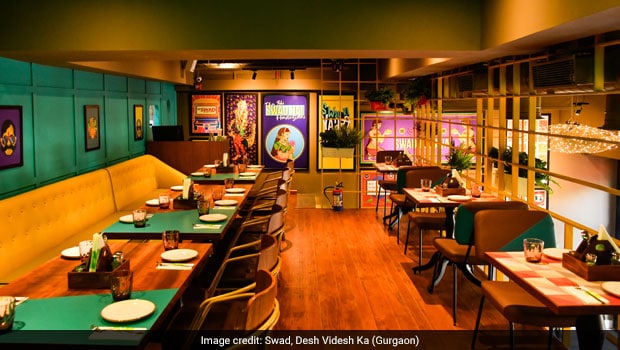 The restaurant serves all things veg and delectable!

After making its mark in the food and restaurant industry with its first outlet that opened in Nehru place last year, Swad, Desh Videsh Ka has now taken over Gurugram as well! Living up to their 'pledge to veg' idea, the restaurant serves all things veg and delectable! The moment you enter this place, you'll notice eye-catching bright abstract patterns, quirky portraits, which are all set-up under a fusion theme. Swad's unconventional and aesthetically pleasing interior along with funky quotes is well represented with the chef station having a neon signage saying 'bavarchi' and a hashtag wall saying 'swadanusar', which is appealing to the millennials who are always on the hunt for a photogenic ambience. Catering to an all-age audience with a modern twist, the menu provides vegetarian cuisine the credibility it deserves with dishes such as tandoori momos, dosa bites, gol gappas, chhole bhature and many such all-time favourites infused with a blend of the best flavours and ingredients. Oh, and an enticing mocktail menu adds to the charm of the place.

The sweet yet tangy dahi mix added a perfect flavour to the fusion chaat!

We sampled few dishes from their extensive menu and here's our take on them. You can start your meal with some bite-sized nibbles that serve as perfect appetisers. We tried the Firangi Papdi Chaat, which was an interesting mix of western nachos that were coupled with desi traditional papdis. The sweet yet tangy dahi mix added a perfect flavour to the fusion chaat!

Veg Shami Pate With Ajwaini Maska was full of flavours

Among the starters, you can go for Tandoori Achaari Momos or Veg Shami Pate With Ajwaini Maska Kulcha. While the momos were coated with an achaari masala, the kulcha was pan-seared with ajwain, butter and Kerala tamatar chutney that complemented well with the shami pate paste! Another fusion dish on the menu that caught our fancy was the Dhokla Papdi With Seenghdana Pesto; however, it failed to impress us as it had quite pungent flavours.

If you wish to savour something hot and comforting, go for their Kachori and Kadhi, where khasta kachori is crushed in a bowl and loaded with Rajasthani Kadhi and dollop of ghee. The tangy and spicy dish tantalised our taste buds and left us craving for more!

We bet you haven't tried this vegetarian version of rogan josh!

However, the highlight of our meal remains to be Veg Rogan Josh and Kathal Biryani with Mirch Ka Salan and Raita. We bet you haven't tried this vegetarian version of rogan josh! Made using mock meat, the rogan josh paired really well with kathal biryani that had a burst of eclectic Indian spices. Oh, and there's Shakahari Butter Chicken on their menu as well. We wonder how that would taste like, though?!

We rounded up our meal with Malpua and Jalebi

After noshing down the vegetarian spread, we had our tummies almost full. But then, who can say no to desserts! We rounded up our meal with Malpua and Jalebi, which was served with a generous serving of Rabri, which was melt-in-mouth.