Beer Face-Off: Which One Has the Most Fizz? 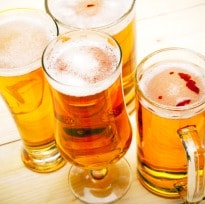 For a bunch of beer buffs like us, it's not hard to believe that it is the third most popular drink after tea and water. The ancient Babylonians were the first to brew it with three main ingredients - malted barley, water and hops for flavor.

Truth be told, your favorite beer might be the one that you haven't tried yet.  In that spirit (pun intended), we raised our frothy mugs for a blind taste test. When it comes to beers, most people have fierce brand loyalties. If you are one of them, a lot is about to change. Cheers!

What is a lager?

Before you crack a cold one, here's what you should know. Lager is a type of beer that is brewed and fermented at low temperatures, generally below 50 degrees Fahrenheit.  Being light bodied, pale lagers are the popular pitcher of choice around the world. The flavor offers a balance between the sweetness of malt and the bitterness of hops. The name comes from a German word which means 'to store', it is stored or lagered for a while which may last from several weeks to months. The alcohol content typically varies from 3.5% to 5%. (10 Things You Didn't Know About Beer)

We tanked eight popular brands of light lagers that are easily available across the country. They were bottled pints. These included domestic, Indian manufactured foreign liquor and imported ones. These beers were in a similar price range with the same brewing style. We will have another tasting session for high end beers.

We blind-tasted (not knowing the brands) various brews which were compared with each other over a number of parameters. Here's what we looked out for -

Bitterness - The bitterness comes from hops. The flower of the hop bine is used as a flavouring and preservative agent. How do you like your beer? Bold and bitter or light and lively.

Appearance - Was it pale or bright golden? The colour of beer should be seen under natural sunlight.

Flavour - What does the beer taste like? Hopy, fruity, floral, malty, watered down or crisp. For light beers, the flavours should be rather subtle. (What Makes Beer Taste So Good)

Mouth Feel - Mouth feel is a combination of the first impression and the aftertaste.  Hold it for a while and let the flavours sink in - that's how beer nerds would do it.  Does it leave you with a lingering sweetness of malt or the bitterness of hops?

Carbonation - Flat, bland and boring? No, please.  Fun and fizzy is the way to go.

Aroma - The aromatics of beer are released immediately after it is poured.

What we also kept in mind -

This one ranked respectably and was easily enjoyable. It was crisp and light with an appealing aftertaste. The taste is synonymous with the fine quality of imported malt and hops that are used.

"You have to work hard to deserve to drink it" - Ernest Hemingway. This was the best of the bunch. It's just want you need to thrive on after a long, exhausting day. It was full of life and golden smooth. The flavor was very relaxing with pleasant notes of honey. It has a subtle spark that quenched our thirst. The bitterness was restrained and perfect. (How to Cook with Beer)

Another stunner, Fosters offered a lot to look forward to. This brew definitely deserves a spot in your refrigerator. It was frothy with a fruity aroma and a lingering aftertaste. We loved it for its distinct sweetness. The bitterness of hops blends with the sweet finish. The taste was harmoniously balanced and crisp.

This light bodied beer sells strong and is often regarded as the 'get drunk beer'. But, the unsavory wateriness just didn't appeal to us. It seemed as though they probably forgot to add any flavor as it has no after-taste. It is known to be largered in lager tanks for almost three weeks, but the taste was not even close to refreshing.

This classic American-style lager went down our throats almost unnoticed. The flavour was bland and boring.  It almost had no character and tasted like bitter water.  It was flat and lacked acidity. You'd never find us near this one. Not a chance.  Miller uses local hops, barley and brewer yeast to make it crisp but we found it almost characterless.

This dark-coloured brew was heavily carbonated with a strong after-taste. The unwelcome flavour made it a complete downer. It did have a sweet and floral aroma. It may appeal to those who like strong and bold beers.

First the sweet notes hit you and then the bitterness takes over. We thought it was a bit watered-down. The one redeeming quality was its inviting aroma.

Nothing sets this brew apart from the pack. It was bitter at the start which lasted till the end. This is one beer which is imported from Mexico while the others are all bottled in India, thus it costs more. It goes without saying that the lime wedge does a lot in enhancing its flavor.

All said and done, an honest brew makes its own friends. Tell us the one that gets your buzz going...

This taste test was in no way sponsored by any brand(s). All expenses were borne by NDTV. All reviews are strictly personal opinion of the authors. The same should not be construed as the opinion or policy of NDTV. Always do your own research on products and companies before using a product you choose. NDTV, its affiliates and its management does not claim responsibility for any of the products/ or companies discussed on this site.

Order In The Most Delicious Burgers From Burgerama And Enjoy A Hearty Meal At Home
From Biryani To Butter Naan: The Masala Story Is A One-Stop Destination For All Your Indian Cuisine Cravings