In Search of the Perfect Burger 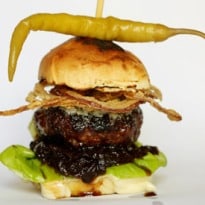 A good burger is a thing of beauty. As two cult chains open in London, we ask if the new imports are any better than what's already on offer.

What seems like a hundred years ago, a phenomenon arrived in my provincial city. Its name was McDonald's. My fellow citizens went wild for the place, overwhelmed by its novelty, by the thin salty 'fries' ("Fries? Whit the buggery are yon?"), the burger that actually bent in the middle and its sweet, exotically seeded bun, the whole, glamorous American-ness of it all. As food writer and burger maven Josh Osersky puts it in his book on the iconic beef sandwich: "nothing says America like a hamburger". A couple of decades later, I thought we had outgrown all that nonsense, that goggle-eyed thrall to all things corporate You-Ess-of-A. Apparently not. Two Stateside behemoths just landed in London with every bit as much worshipful fanfare as if aliens had parked their spaceships above the piazza in Covent Garden. Here's Shake Shack, from arch-restaurateur Danny Meyer with its "smashed" patties and potato buns; over there is Five Guys, allegedly beloved of Barack Obama, with its proud no-freezers, peanut-oil-only boasts. People camped overnight in anticipation of the openings. A friend who heroically joined the day one, two-hour long queue for Five Guys reported that people were joining the queue simply because there was a queue.

What is it about burgers that's creating this current critical mass? It may be an overused word, but the burger can genuinely lay claim to the status of "icon". It can be dressed up à la Daniel Boulud (probably the first of the big name chefs to become burger-obsessed just over a decade ago) with his sirloin burger stuffed with braised short rib and with foie gras or dressed down like the 'Dirty Burger' below. It has moved seamlessly from a snack to grab on the run without care for provenance or sustainability, to the knowing plaything of the foodist classes.

Burgers are the perfect fodder for a recession-hit Britain newly fixated with what it is putting down its neck: the latest, hottest new burger will still cost you less than a fairly ordinary plate of pasta. Although, as George Osborne found to his cost after tweeting his "posh" Byron burger, you will be judged on your choice. These aren't just burgers, these are semiotics.

Lest we forget, a good burger is a thing of beauty, a satisfying, messy manifestation of all things umami: fine beef, sticky cheese, tomatoes: , both fresh and in ketchup, all ready to be loaded up with your heart's content of bacon, relish, salad, pickles, chilli ... there are few things culinary that can be relied on to do their job as effectively. But hey, even a bad burger, a Maccy D's or a Burger King, isn't going to disappoint its legion of fans. They know what they want and they can get it, cheap and filling and - crucially - consistent, time after time. It is a perfect package, a pop art idol, an unimprovable piece of design.

Proper burgers are also tricky to replicate at home unless you have a patient butcher prepared to faff around with percentages of chuck, short-rib, brisket and bone-marrow - just feel those American cuts - and a professional grill in your kitchen. Plus a professional extraction system. Why would you bother anyway, when the High St continues to offer more and more of the things? Chances are, the first time you went out to eat as a child, it was for a burger. At some kind of fundamental level, they allow you to experience food in a way you probably haven't since you were very small. And you can laugh in the face of cutlery like a giant toddler. The current furore might die down after the discerning discovery that the new imports aren't much more exciting than the old ones. And it's not like we haven't been creating some pretty magnificent specimens of our own, spearheaded in London by the likes of the MEATliquor crew and rapidly colonising most of the UK's major cities. But, when the queues do disappear, burgers are here to stay, defying health advice and food fashion. Businesses like them - nice fat markups. And punters love them. It will be ever thus until we all combust in a giant ball of methane. Which is exactly how I feel after road-testing this little lot.

Bun: Just the right amount of heft to contain the explosion of beef, grease and cheese.

Toppings: "Hippie" sauce a bit like a mustardy Thousand Island. Minced white onions delivering a touch of retro-Wimpy. Cheese that seeps into every beefy crevice thanks to a final "cloche-ing" on the griddle. Lettuce, tomato, pickle on the side.

USP: Apparently based on a burger from cult Californian In-N-Out's Double Double Animal Style, it's no beauty to look at. A greasy beast delivering a massive thwack of satisfaction.

Meat: Sure, it's 100% Aberdeen Angus, grass-fed in Scotland, but what's the point if that ends up as an anaemic patty in dire need of charring? And where's the seasoning?

Bun: Weird muffin-like consistency. With this much bun to burger, you want more bite.

Toppings: Cheese - unchallenging, as it should be. Crisp lettuce, but they forgot the "ShackSauce"on mine. Why bother with tomato if you don't source decent ones?

USP: Famous US chain opens in the UK; we're meant to swoon at its majesty. Not buying.

USP: Virtually flawless. The only improvement would be supersizing. (These are mini sizes, so I usually order two. At least.)

Bun: Clammy, sesame-topped - it looks like it came from Burger King. And then someone sat on it.

USP: DC import brought to us by boss of Carphone Warehouse; queues of up to two hours for one of these foil-wrapped disappointments. Can only attribute it to mass hysteria.

Meat: Dense, aged beef with a nice "animal-style" mustardy crust. Highly-seasoned, with real beefy bite, but could be pinker and juicier.

Bun: Just the right side of dense, shiny, demi- brioche. Excellent vehicle for the meat.

USP: The perfect finale to a night on the lash. A no-frills surprise from swanky Soho House group, but not nearly as "dirty" as it thinks it is.

Bun: Glossy, sweetish, toasted brioche that's just about up to the job of keeping it all together.

USP: A juicy, messy monster to lose yourself in.

Meat: AF welcomes "meat sluts" and "meat whores" to get grubby with their slobbery big snogs of burgers made from filler-free aged Cheshire chuck and brisket.

USP: After their devastating fire in Manchester, the AF crew are about to land in Liverpool. Dirty, rude, politically incorrect fun.

Veggieburger: Take one portobello mushroom, whack a slab of cheese on top, coat the lot in seasoned breadcrumbs and deep-fry until crisp. Result: when you take that crucial first bite, molten cheese ejaculates, scalding your mouth and hands. Burgers are meant to be messy, but this takes the biscuit.

Bun: Same bun as the ShackBurger, but the mushroom fills it way more impressively.

USP: It's not a bean burger.

Veggieburger: Somewhat dull mushroom, not smoky, served tepid. Could do with marination and/or fiercer grilling.

Bun: A little too pillowy; without meat juices, it seems dry.

USP: For a carnivore, this is a poor substitute. But kudos to Byron for catering for vegetarians.