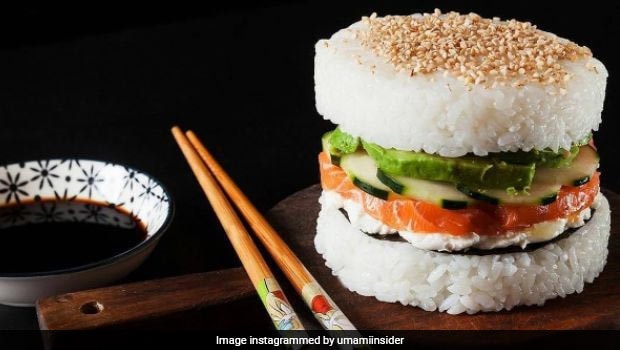 Highlights
What is the most unique type of burger bun that you've ever tried? Perhaps the Gothic black bun or the one crusted with sesame seeds or the Kaiser Roll, but what about a rice bun? Sounds unusual, right? Recently, there was a lot of talk about sushi burgers and now a similar trend has caught everyone's fancy. We're talking about the rice burgers that originated in Korea.

What is a rice burger?

A rice burger is a variation of a traditional hamburger and does not use regular burger buns. Instead, compressed rice, shaped like buns, is used to hold the meat and veggies together. These rice burgers are filled with flavourful ingredients and an assortment of vegetables that include lettuce, pickled radish and corn among others.

A staple dish in Korea, the rice burger is now gaining popularity on the global platter with foodies experimenting with their own versions of the dish.

Rice burgers are believed to have originated in Japan. The MOS Burger Fast-Food Restaurant Chain was the first one to introduce rice burgers in their menu back in the year 1987 and soon they became popular across East Asia. In South Korea, rice burgers are known as Bap Burgers (Bap means rice in Korean language). Koreans like their rice burgers with fillings like Kimchi, Tuna, Pork with Carrots, Spicy Pork with Avocado or Soy Sauce with Chicken. Rice buns are generally toasted and scorched to give them a subtle crunch and smokey flavour.

Recently, Cup Bap burgers made their entry in a few restaurants in Korea.  Here, the rice buns aren't toasted but have some sesame oil, seaweed and soy sauce mixed in them. You also get a small cup of Katsuobushi (dried Tuna) broth to go along with it.

Earlier this year, rice burgers came into limelight for their high sodium content. Reportedly, a single portion of rice burgers contains almost half or more of a whole day's sodium intake, sending a health warning to youngsters who indulge in them regularly. The World Health Organisation recommends an average sodium intake of 2,000 milligram per day.

How is a rice burger different from a sushi burger?

Sushi rice that is used in the burger is typically seasoned with vinegar, while unseasoned white rice is pressed and crisped on a hot griddle to make a rice bun. Have a look at some amazing varieties of rice burgers that people are experimenting with.

Came across any other exciting food trend recently? Let us know!