Overexposed: The Sun Damage That Can Lead to Skin Cancer and How to Treat it 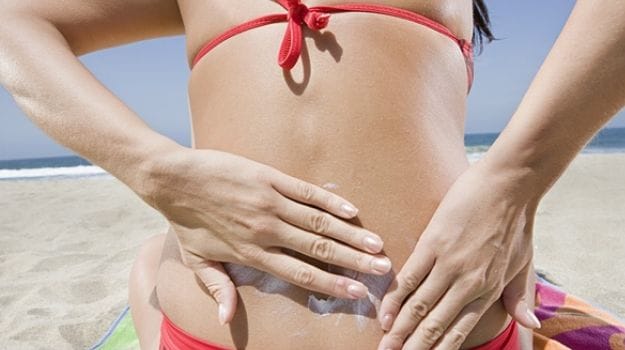 Watch your back … skin cancer is the commonest type. Photograph: Sian Kennedy/Getty Images

Despite the warnings, many of us still overdo it in the summer sun. Here are the main types of skin damage to watch for and what to do about them.

Summer holidays still mean one thing for many people; basting in the sun until their skin tingles. But though it may top up vitamin D levels, too much sun is undoubtedly a bad thing, especially if you have light skin. One in five of us will get skin cancer at some stage, and there are more cases of skin cancer than all the other cancers put together. Consultant dermatologist Howard Stevens of Skin Care Network says the key messages are simple; avoid the sun between 11am and 3pm, cover up and use sunblock. "Look at your skin and examine your own back. If you see something that isn't healing after three to four weeks or is growing, you need to seek medical advice."

Most skin cancers are non-melanoma; 75% of those are basal cell carcinomas (BCC) related to sunburn, 20% the more serious squamous cell carcinomas (SCC) related to long-term sun exposure and 5% are rarer types. Melanomas are less common, but more dangerous. They are in fact being seen more often, and although survival rates have improved substantially, they still kill three or four in every 100,000 people in the UK.

My memory of childhood holidays is of days spent in the sun and nights spent radiating heat. Nowadays, we know better, although you still see seriously overcooked Brits on beaches around the world. Sunburn is an inflammatory reaction of the skin to overexposure to UV radiation. The short-term pain goes away on its own but it can cause irreversible skin damage and predisposes you to skin cancer and premature skin ageing.

These are the crusty little patches that appear, particularly on middle-aged, fair-skinned men once their hair recedes and their scalps are exposed to the sun. They also appear on other exposed parts such as the ears, backs of hands and forearms. There is only a tiny chance that an AK will become cancerous (from 0.025-16% a year) but it's hard to predict which will progress to a squamous cell carcinoma (SCC), so treatment is usually recommended. They can be frozen, burned, scooped off or treated with a range of creams containing drugs that destroy them. The treated areas can leave scars; a strong incentive to slap on a hat and sunblock before they start to develop.

This is the commonest cancer overall in the US, Australia and Europe. It can look like a small raised nodule, a non-healing scab or a crusty wound. They usually grow slowly and aren't fatal, but can grow very large. A tendency to BCCs can be genetic, so if you're white, love the sun and have family members who have had them, you'd be well advised to cover up and look out for suspicious skin changes.

Treatment depends on size, type, and where it is. They can be frozen, shaved, cut out, treated with a light sensitive cream then blasted with a strong beam of light (photodynamic therapy) or treated with a cream that creates inflammation (imiquimod) or destroys cells (5-fluorouracil). Radiotherapy is occasionally used for elderly people with BCCs on the face.

A drug called vismodegib is a new treatment for advanced or spreading BCCs, while Mohs is surgical technique used to make sure the whole BCC is removed without cutting more tissue away than is necessary. Slices are removed and examined bit by bit under the microscope until it is all removed. Most BCCs can be cured, though they may recur. Only a tiny minority will spread to lymph glands and become fatal.

Related: Pensioners seven times more likely to have skin cancer than in 1970s

UV radiation (both A and B) from the sun and sunbeds is the main cause of SCCs. They can look like sores, ulcers or crusted lumps on sun-exposed areas. They usually grow slowly over months or years so can be easy to miss until they get quite large or start bleeding. They may be confined to the outermost layer of the skin (Bowen's disease) or penetrate into deeper layers of the skin (invasive).

Promoted
Listen to the latest songs, only on JioSaavn.com
In 5% of cases, an SCC may spread to other organs (metastatic) and be fatal. This is more likely in people whose immune system is severely impaired. Smoking predisposes one to SCC of the lip. If you are over 40, white, have actinic keratosis, a previous SCC or an impaired immune system, it pays to be particularly careful. Treatment is usually by cutting them out, using the Mohs technique if available. The vitamin nicotinamide (vitamin B3) 500mg twice a day may offer some protection against a recurrence of BCC or SCC.

This is the most serious type of skin cancer, and is most common on parts of the body that get intense, short bursts of sun like the back in men and legs in women. Tanning beds and sun lamps have also been associated with melanomas. Advanced melanoma has a high death rate but the earlier you catch it, the better your chances of survival. Overall, 85% of those diagnosed will be alive 10 years later.

A melanoma may look like a new mole or a change in an existing one. Normal moles are small (less than 6mm diameter), round or oval and have a clear edge. If a mole changes shape, size, colour, sensation (becomes itchy) or surface (starts crusting or bleeding), you should see your GP. Treatment depends on the stage of the disease; surgery to remove the melanoma is always necessary, followed by radiotherapy and chemotherapy in more advanced cases.

Drugs that boost the body's immune reaction against the melanoma (such as interferon-alpha) are in use. Trials into a vaccine to make the body produce antibodies against the melanoma are underway. Monoconal antibodies can be produced that lock onto specific cancer cells: ipilimumab has been licensed for UK use since 2011 and is approved for use when advanced melanoma spreads or can't be removed. Drugs that disrupt signals between cancer cells (eg vemurafenib) are also being trialled for advanced and inoperable cases.

Want Radiant, Clear Skin? This Coriander And Lemon Juice May Help
Post-Lockdown Skin Care: 15 Foods To Include In Your Diet For A Healthy Skin