A Barbecued Squid Recipe to Impress Your Friends 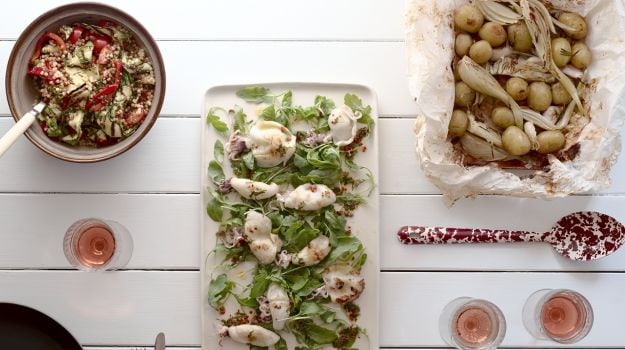 Barbecued squid with a salad of fregola, grilled vegetables and basil, potatoes and fennel in a bag. Photograph: Jason Lowe for the Guardian

This humble cephalopod takes happily to the barbecue: its pearly white flesh charring perfectly to become an ideal vehicle for a piquant dressing. Serve with grilled veg salad and potatoes and fennel en papillote. Who needs hotdogs?

I spent the first week of August staying, with our three children, in a tiny cottage near Polegate in Sussex " the mobility scooter capital of the South East, incidentally. With no proper cooking equipment to play with, I rustled up every lunch and dinner on a barbecue, like some kind of suburban Bear Grylls.

First there were sausages. So many sausages that I became unreasonably fascinated by the way bubbles of steam form under the skin and skid upwards through the curls of mince, before coalescing in elongated pockets on top.

Then there was steak, of course (of which more next week); pink fir apple potatoes from the garden, sliced into lozenges and lightly coated with oil; leeks slit down the middle and dressed in mustard; the last of the broad beans cooked in their pods and then popped out like edamame between the lips; and an ox tongue, served with a robust salsa verde of garden parsley, sage and red wine vinegar.

But the biggest hit of all was the squid. They are strange beasts, these prehistoric cephalopods with their three green hearts, jet propulsion, and colour-shifting ways. They also happen to be delicious cooked simply over an open fire, and since there is currently an over-abundance of squid " perhaps due to the overfishing of their predators " you can eat them with a clear conscience. Even better than sausages.

Note: When cooking squid on a barbecue it is important to get the coals as hot as you can, and to cook the squid quickly. If you cook it for too long, it will be tough. A minute on either side should be fine and patches of a nice tan char should appear. You can leave the tentacles on for longer until they are crispy. Be careful though: I find it almost impossible not to lose half of them between the bars.

1 Ask your fishmonger to gut and clean the squid. When you get home, separate the tentacles from the body. Cut the body on one side and open it up. Score the inside doing a criss-cross pattern lightly with a knife but without cutting through the squid. Rinse well and allow to dry in a colander.

2 Mix together all of the sauce ingredients and season well.

4 Remove from the grill on to a plate with the rocket, drizzle with the sauce and serve with the lemon wedges.

It's important to get the coals as hot as you can, and to cook the squid quickly

1 Cook the fregola in boiling water for about 8 minutes (or as per the instructions on the packet). Drain well and toss in a little olive oil with seasoning.

2 Place the red peppers on a grill (if you are confident with the amount of heat your barbecue will produce over time, you can do the courgettes and peppers on that before the squid). Leave on the grill for a few minutes on each side until the skin is charred.

3 Remove to a bowl and cover with clingfilm (or pop them into a clean plastic bag and tie up the handles). This will allow the peppers to sweat and will make the removal of the skin easier. When cool enough to handle, skin the peppers and remove the core and seeds. Slice into thick strips.

4 Cut the courgettes into strips about ½ cm thick. Toss in a little oil, season and grill for a few minutes each side. Add the peppers and courgette strips to the cooked fregola.

5 Cut the tomatoes into halves or quarters and add to the salad. Make the dressing by blitzing together the garlic, basil and oil. Stir through the salad.

Related: How to make a barbecued beef salad | Back to basics

Potatoes and fennel in a bag

2 Cut the potatoes into halves or quarters " try to make them roughly the same size. Cut the fennel into 8 wedges.

3 Mix the potatoes and fennel together in a large bowl. Add the rosemary, garlic and season well.

5 Place in the oven and cook for about 50 minutes. After that time the package should puff up and the potatoes be perfectly cooked inside with the fennel, herbs and garlic.

6 Remove from the oven and break open the bag when serving.