A Month's Food to be Cheaper Than Movie Ticket: Delhi Minister 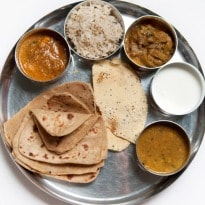 Be it a rag picker, a rickshaw puller, a labourer or a housemaid or for that matter anyone earning less that Rs.100,000 a year - all stand to gain from the ambitious National Food Security scheme rolled out in Delhi, says Food and Civil Supplies Minister Haroon Yusuf.

Each beneficiary will get 25 kg of wheat and 10 kg of rice a month at less than the price of a movie ticket in Delhi, the minister told IANS in an interview. Rice will be available at Rs.3 a kg and wheat and coarse cereals at Rs.2 and Rs.1 per kg respectively.

The scheme, which will cover 7.3 million people in Delhi, is touted as a "game changer" with assembly elections in Delhi due this year and the next general election in 2014.

The scheme was launched by Congress president Sonia Gandhi last month and rolled out in Delhi Sep 1.

The Congress in Delhi feels the food security scheme's successful implementation could help it win a fourth term. The Congress has governed Delhi since 1998 with Sheila Dikshit as the chief minister.

Asked if identifying 7.3 million beneficiaries would be an arduous task, Yusuf, 55, said: "It is not going to be tedious and difficult. We will take people who have Aadhar cards, earn less than Rs.1 lakh as income, people living in unauthorised colonies, rickshaw pullers, rag pickers and those living in (low) category of houses."Yusuf, who has held various portfolios in the Delhi government, rules out any possibility of corruption in the scheme, which is based on the Public Distribution Scheme that faces allegations of corruption.

"Earlier, because of bogus ration cards, the real beneficiary would be duped of his/her quota of ration. How do we plan to weed out these bogus cards? By using Aadhar cards and linking them with their ration cards. Every individual can have only one Aadhar card and that will have his or her Delhi address. It will put a check on corruption, the real beneficiary would get his entitlement," the minister said in a 30-minute interview.

"To get the benefit of the scheme, people must have Aadhar numbers. In case they don't have it, we have asked our food supply officers to inform them where they can get it done. If they have the Aadhar enrolment number, we will accept that too," the minister added.

The Delhi government was among the first Congress-ruled states to roll out the flagship programme which seeks to provide highly subsidised foodgrain to 800 million poor and underprivileged people in India.

Asked how the Delhi government would ensure that foodgrain reached the beneficiaries, Yusuf said: "There will be a food security commissioner. Anybody can complain if he is not getting foodgrain. The official will have enough power to prosecute the defaulter."

The Delhi government will also issue smart cards for procuring foodgrain, which would be issued in the name of the senior-most woman family member.

"We have readied 4,000 smart cards. Now we will expedite the process. Ninety-two percent of the population already has Aadhar numbers."

Yusuf says his party will go to the voters with the scheme.

"We are a political party. When we go to the people, we will talk about the scheme, besides other development work done by us. We have every right to say this is a Congress scheme," Yusuf said.

But he added: "It is unfair to call this scheme as game changer."

"Any sensitive government would do it. Soniaji thought about it and discussed it at length... It is a kind of helping hand to the poor who can at least feed their children."