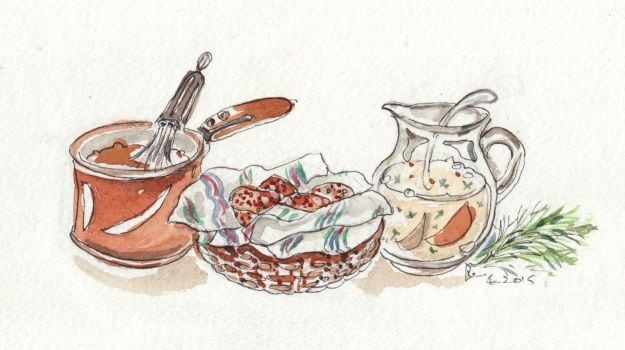 The Sunday before Easter is the little-known holiday Cheese Sunday, a day of traditions that survived in a Ukrainian community marooned in Slovakia by the stroke of the politician's pen following the end of World War II.

In Eastern Europe, hidden away in the Soviet sphere behind the Iron Curtain, half a century of state-imposed communism in the workplace failed to obliterate regional differences at home -- in spite of efforts to standardize culinary habits by limiting official food supplies to factory canteens.

The miracle was that when the Iron Curtain was finally rolled away, people had not forgotten the dishes appropriate to festivals such as Easter, the most important feast day of the Orthodox Church calendar. And if the recipes themselves had vanished, there were minority populations on the wrong side of the border -- any border -- who had been left to continue their traditional ways of life throughout the communist years as long as they didn't pop their heads over the political parapet and give the authorities any trouble.

Among these inadvertent repositories of national habit were the Ruthenes of Ladomirova, a farming community of Ukrainians marooned in a far corner of Slovakia along the foothills of the High Tatras, a mountainous region noted for wolves and bears. A hard-working, self-sufficient farming community, the Ruthenes, at the time of my visit in 1991 -- shortly after the fall of the Iron Curtain -- continued to live more or less as they always had, stocking their own store cupboards and selling the surplus on the unofficial market in Svidnik, the only town of note in the region.

Svidnik was dull as ditch water by day but merry enough on a Saturday evening, when the wine cellar under the railway arch served as a gathering point for the town's youth, Ruthenes among them. There they could enjoy loud pop music, flirting, dancing, slightly fizzy white wine and fast food - a slab of sheep-milk cheese fried in a crisp jacket of breadcrumbs served with a dollop of creamy sauce speckled with dill.

"This is what is called chicken Kiev but is made with cheese and is eaten with sauce tartar," explained Katrina, my self-appointed translator, a Slovak-speaking Hungarian anthropology graduate studying the Ruthene lifestyle but keen to practice her English -- or possibly a political operative keeping an eye on the crazy foreigner attempting to communicate with a sketchbook and paint box.

The following day, the last Sunday before Easter, all was revealed when Mama Anna, the matriarch and memory keeper of the Ruthene community in Ladomirova, prepared the same dish -- cheese Kiev with tartar sauce -- as the traditional recipes for Cheese Sunday.

The proper cheese for the dish, Mama Anna explained, is dried-out sheep's milk kashkaval from the previous spring, which must be eaten up to fulfill the obligation to empty the cupboard before Good Friday. The sauce, a savory custard made with the first rich milkings from the household cow and eggs from hens just come back into lay, delivers a message of good things to come.

Whatever its place of origin - or even the thoughts expressed through good food set on the table to welcome strangers - the combination works. Celebrate your own Cheese Sunday with the traditions of the Ruthenes of Ladomirova and raise a glass at this festival of renewal to the hope that peace may come to a divided people who don't deserve what they get.

Mama Anna advises that some people like to add chopped dill and other flavorings such as chives and pickled cucumber and onion, but she herself prefers it to taste of itself, the goodness of spring.

1. Whisk up the yolks, soured cream, sugar, salt, mustard and lemon juice or vinegar in a small pan, and cook the mixture over a gentle heat (or in bowl over boiling water), stirring all the time, until it begins to thicken like a custard.

2. Leaving it over the heat, whisk in the oil as if for a mayonnaise, then whisk in the wine and sweet cream.

3. Remove from the heat as soon the steam no longer smells of alcohol. Let cool a little and serve warm

In the lambing season, the ewes are brought down from the hill and milked three or four times a day by hand so the newborns are not deprived of their share. Last year's cheese, by now too hard to eat uncooked, melts to a creamy softness in its crisp jacket of breadcrumbs. Any mature hard cheese will do, though it's easier to coat if you slice it ahead and leave it in a warm kitchen for a few hours for the surface to dry and firm.

1. Slice the cheese into 4 thick fingers or triangles.

2. Mix the paprika and flour on a shallow plate. Fork up the egg with the milk on another plate. Spread the breadcrumbs on a third.

3. Dust the cheese slices through the flour, dip in the egg-and-milk mixture, making sure all sides are well-coated, and then press firmly into the breadcrumbs.

4. Heat the oil in a heavy pan till a faint blue haze rises -- the temperature should be high enough to seal the coating immediately, so test with a cube of bread (it should form little bubbles round the edges and brown quickly).

5. Slip the cheese pieces into the pan, spooning hot oil over the top so the heat reaches all sides. Fry till crisp and brown.

6. Remove to kitchen paper with a draining spoon.

Promoted
Listen to the latest songs, only on JioSaavn.com
7. Serve piping hot with the tartar sauce for dipping.