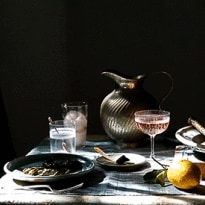 My last bite would be something that I had eaten at the beginning of my life, too. I like the idea of things coming full circle. In Lebanon, there's no notion of nursery food. Kids eat with their parents - they just have what their mother has cooked for the whole family.

As a child, I always loved mehshi silq bil-zeyt. It's Swiss chard stuffed with rice, tomatoes, herbs and spices. The dish is silky and luscious with a wonderful mouth-feel; the textures in the stuffing balance perfectly. Stuffed vegetables are very common across the Levant. Swiss chard always seems extra-special, because it is so seasonal.

If I could, I'd go back in time and source all the ingredients from Jamil. He worked for my family when I was a kid in Lebanon and grew produce in his back garden. You could, without a doubt, taste the love and care with which his vegetables were grown. I haven't had better; sadly he's no longer with us.

I like the idea of drinking something luxurious and elegant to accompany simple food. Hmmm, Cristal Rose champagne. That goes with everything, doesn't it? (And if I'm being honest, I might sneak in a few mouthfuls of foie gras and caviar, too.)

My selfish side would choose to eat the whole meal alone. That said, I would definitely ask my mother to cook it, and offer a little of my help, as stuffed chard takes forever to prepare. I base my recipe on hers, although I've made some tweaks of my own. Traditionally, the stuffing has split chickpeas that have been soaked overnight and then skinned. I don't like their crunchy bite and find it an unpleasant contrast to the melting rice. Their exclusion is a definite improvement.

Rosewater sorbet would be the most fitting finish to the meal. I'd get it from a shop called Hanna in Beirut - just divine.

A meal of this nature would need to be eaten in peace. Looking out over a Sicilian landscape, maybe with a view of the sea. A soundtrack of something equally pure would be in order - Chopin or Beethoven, perhaps Schubert. A beautiful fade-out.

In the south, they leave out the lemon juice and olive oil and increase the amount of sumac to 3 tbsp. I never tried it this way but I can't imagine it to be an improvement.

1 To make the stuffing, first rinse the rice under cold water. Drain thoroughly and put in a mixing bowl. Add the rest of the stuffing ingredients - the stuffing should look like a salad. Taste and adjust the seasoning if necessary.

2 To prepare the chard, cut the leaves in large enough pieces that you can roll them around the stuffing at least four times - otherwise they may become too fragile to handle and they may break during cooking or serving. Ideally, each leaf should divide into three, one piece from the top and two from either side of the stalk. You are bound to have some damaged leaves, so first line the bottom of a large casserole with the damaged leaves, thin stalks and tomato slices.

3 Take one leaf and lay it, smooth side down, on your work surface with the cut side nearest to you and the veins running away from you. Spread 1 tsp of stuffing (or more depending on the size of the leaf), in a long, thin and slightly raised line, the thickness of your little finger, about 1cm inside the edge nearest to you and the same distance short of the side edges. Fold the narrow strip of leaf over the stuffing and roll into a flat and loosely packed roll so that the rice has enough room to expand. Flatten the empty edges, lift the rolled leaf carefully on to the pan and lay over the tomatoes with the loose end down.

4 Continue stuffing, rolling and arranging the stuffed leaves side by side, doing one layer at a time until you have finished both leaves and stuffing. If you have any stuffing leftover, put it in a small pan, cover with water and cook over a low heat to serve on the side. Use the leftover leaves, if any, to cover the rolled ones.

5 Pour enough water into the casserole to barely cover the stuffed leaves and add salt to taste, bearing in mind that the stuffing is already seasoned. Cover the leaves with an overturned plate to stop them from unrolling during cooking, put the lid on the pan and place over a high heat. Bring to the boil, then reduce the heat to medium and boil gently for 45 minutes or until the stuffing is done. Two thirds of the way through cooking, taste the broth to check the salt, adding more if necessary. When the 45 minutes are up, it is a good idea to taste a filled leaf to make sure the rice is done. If it is cooked through, turn off the heat and let the leaves cool before transferring them delicately on to a serving dish (I usually pick up the rolled leaves with my fingers to keep them intact, if you don't like using your fingers you may have to use two spoons for the longest leaves). Serve warm or at room temperature.