Apple Cider Vinegar For Diabetes Management; Here's How You Can Consume It

Diabetes: In recent years, researchers have been taking a closer look at apple cider vinegar and its possible benefits. From weight loss to diabetes management, this wonder potion is one of the healthiest things you can add to your diet 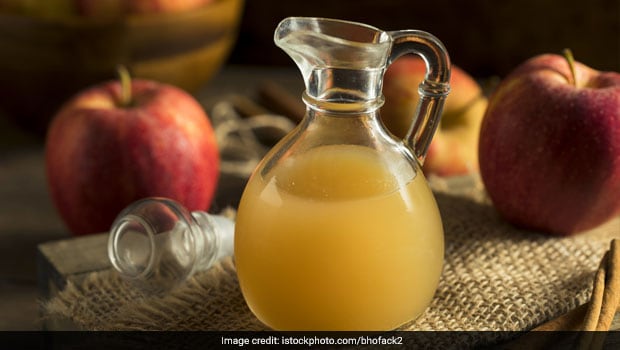 Apple cider vinegar is derived after an elaborate processing and fermenting of apple juice and pulp.

All components of apple can be used for homemade apple cider vinegar fermentation. By cutting the apples into small cubes, their surface area increases, which aids the fermentation process.  The apple pieces are submerged in a water and sugar or honey mixture for fermentation.  Once the bits are submerged, a breathable covering is placed for two weeks. It is then strained and stored for another four weeks until vinegar is achieved.

Apples are brought to a processing belt where they are crushed, pressed, and the juice is separated. The material is stored in a submerged bioreactor where the first fermentation process begins. Constant oxygen is fed and alcoholic fermentation is achieved. This fermentation is caused by bacterial strain acetobacter. Then the ethanol produced yields acetic acid and vinegar. The "mother" is a microbial culture left in the vinegar prior to distillation and pasteurisation.  It is believed that the "mother" is the source of the apple cider vinegar's health benefits, which in turn depends on the microorganisms' ability to create acetic acid fermentation.

Apple cider vinegar may boost your health in many ways. It only contains about 3 calories per tablespoon, which is very low. It does not contain many vitamins or minerals in it, but it does contain a small amount of potassium.  A good quality apple cider vinegar also contains some amino acids and antioxidants. Apple cider vinegar can help kill pathogens including bacteria. It has traditionally been used for cleaning and disinfecting, treating nail fungus, lice, warts and ear infections. Hippocrates also used vinegar for wound cleaning over two thousand years ago.

This elixir has also been used as a food preservative as it inhibits bacteria (like E. coli) from growing in food and spoiling it. So you can use it in a natural way to preserve your food. Diluted apple cider vinegar  can help in treating acne when applied to the skin.

a) It is very important to keep your system alkaline to manage diabetes and apple cider vinegar, like all citric fruits, increases the alkalinity in the body, which is beneficial for diabetes mellitus patients.

b) It decreases blood glucose levels.  The acetic acid in vinegar appears to block enzymes that help you digest starch, resulting in a smaller blood sugar response after consumption of starchy meals such as pasta or bread. To incorporate apple cider vinegar in your meals, try adding a splash to salads, marinades, vinaigrettes, and sauces.

c) It has a positive effect on cholesterol with or without diabetes.

d) It may help in reducing fasting blood glucose levels.

e) It contains acetic acid and may slow down the conversion of complex carbohydrates into sugar in the bloodstream.

f) It could help in weight reduction but with limited use (for a short-term).

How To Consume It?

a) Dilute 1 to 2 tablespoons of apple cider vinegar in a large glass of water (>100ml).
b) It can be consumed in between meals.
c) It can be consumed before bedtime.
d) It is a versatile ingredient suitable for salad dressings, sauces and soups.
e) One can first try it for 15 days. If it suits you and you see improvement, you can continue it for maximum 1 month.

What Could Be The Side Effects?

a) If used in more quantities or for long-term (using every day, it can lead to harmful effects.
b) It can cause stomach irritation.
c) It can damage teeth (erosion of enamel).
d) If used undiluted, it can cause nausea, giddiness and increase acidity.

a) Various distilled varieties are available in the market.
b) Clear and see-through varieties can be beneficial.
c) Unfiltered and cloudy varieties are recommended as they are more nutritious.

While apple cider vinegar is said to have all these benefits, it is always better to consult your nutritionist before adding anything new to your diet.

About Author: Dr. Pramod Tripathi is the founder of Freedom From Diabetes.