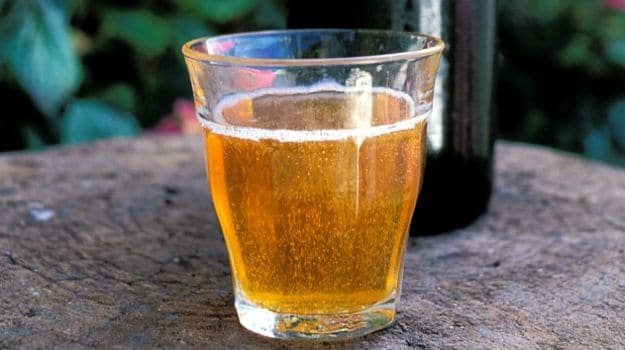 ‘Premium cider is really where the growth is – that’s where a lot of makers are focusing now,’ says Aspall’s Christian Hamilton. Photograph: Alamy

No longer battling for relevance, cider’s place at the core of the UK drinks trade stems from a hike in marketing efforts and the popularity of alternative flavours.

To scrumpy purists, adding the likes of lime and coconut may be regarded as a crime against apples, but to British cider makers it makes perfect business sense, driving the industry to sales approaching "£1bn last year.

According to official figures, "£911m worth of cider, perry and mead produced by UK manufacturers was sold in 2014, up from "£812m the year before. Cider has come a long way from the old-fashioned West Country brew that struggled for relevance among drinkers at the turn of the millennium.

The Office for National Statistics said sales "may have been buoyed by the recent popularity of alternative fruit ciders", with many major producers now offering flavours ranging from cherry to passion fruit. Chris Wisson, senior drinks analyst at market research firm Mintel, said fruit ciders were selling well compared with staple brands made purely from apple. "It is the fruit part of the category that has been stealing the limelight," he said. "Three or four years ago it was pear cider, but last year that flopped and now it's just another fruit cider. If you go to the supermarkets you see apple [cider] is having its shelf space squeezed in favour of these fruit ciders."

But apple will soon be making a comeback, according to Wisson. Half of under-35s have now tried a fruit cider and cider makers are returning to their roots to find the next big hit. "Brands are really going to start repromoting the apple," he said. "There hasn't really been much innovation with apple cider at all."

Ed Bedington, editor of pub trade magazine the Morning Advertiser, said cider brands are spending millions of pounds on marketing blitzes in order to get a foothold in the market. "The increased interest in the category is clear by the brand activity in the sector, which last year saw 92 new cider products launched," he said. "With summer a key time for cider, promotional activity has stepped up a notch, it's clear from the number of billboards."

Fruit ciders make up around 15% of the market " up from 2% in 2005, according to Bob Price, director and policy adviser at the National Association of Cider Makers. Price said traditional cider brewers had seen sales fall recently as rises in duty had seen prices rise in relation to beer " but remained hopeful that fans of fruit cider may one day "graduate" to the traditional drink.

Aston Manor Cider, the UK's largest independent cider maker, is currently planting 1,000 acres of orchards in Herefordshire, Worcestershire and Gloucestershire. These will bring 450,000 new trees, and other makers have similar plans.

Christian Hamilton, who works for Suffolk cider makers Aspall, said advertising from the major brands has the effect of drawing attention to the industry more generally. Aspall, which has been producing cider since 1728, has benefited from the increased interest. "Looking out across the yard now, we are putting in a new apple press which we are commissioning towards the end of the month," he said. "Premium cider is really where the growth is " that's where a lot of makers are focusing now. If you look at the beer market there has been the move towards global makers and craft beers and we are seeing the same in cider."

Sparkling wine has also been a success story for UK makers, with sales up 85% year-on-year to just under "£6m. Recent figures from the Food Standards Agency showed 6.3m bottles of English wine were made from 2014's harvest, of which two-thirds were sparkling, and some of its producers have been winning international recognition.

The ONS figures showed sales of beer were up for a second year running last year, to a value of "£3.4bn. The figure is below the recent "£4.7bn peak in 2009 but suggests something of a recovery in the market. Wisson said that the volume being sold had risen, but in the wake of England's unsuccessful World Cup campaign, supermarkets had offered generous discounts. Alongside this, continued pub closures were hitting the industry. "We have seen a big fall in the number of pubs," he said. "The mark-up is high " you're charging maybe "£4 a pint so you are losing a lot when you lose that channel."